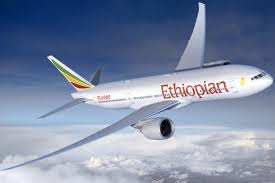 Africa’s leading carrier and the first International Airline to fly into South Eastern Nigeria, Ethiopian Airline, during the week, stormed the Cities  of Enugu, Aba, Onitsha and Owerri to thank the market leaders and others stakeholders who had supported its operations from Enugu.

They started their Eastern  Roadshow from the Ogbette market in Enugu.

The team was received by the executives of the Ogbette Main Market Association (OMMTA).

In a town hall meeting at the executive council chambers, the traders commended Ethiopian Airlines as the airline of choice for most people in the East.

According to the Vice Chairman, Anthony Nebechukwu Nwodo, Easterners are the biggest Travellers in Africa and any airline that wins the Travelers’ hearts will thrive.

They wanted Ethiopian Airlines to increase frequency of its flight from 3 weekly to a daily schedule.

They also asked for a big aircraft like the B777  along with regular cargo flights to bring back all their bags when they travel. They assured the Airline executives that the airline will be supported to succeed in Enugu as they consider ET an organised Airline.

The ET team later visited the Kenyatta market in Enugu.

Other towns the team visiton the thank you tour include Onitsha, Aba and Owerri. The tour is part of Ethiopian airline reach out to Nigerian Travellers over the last 3 months.

In his response the GM promised them improvements on service delivery.

He told them that starting from March, Ethiopian airlines charged the same fare from Enugu and Lagos so there is no need traveling by road to Lagos to get a flight out of Nigeria.

He also promised new cargo flights to Enugu once they get the necessary approvals from the Nigerian government.

Recently the Airline was chosen by the largest travel association in West Africa the 1500 members  strong National Association of Nigerian Travel Agents NANTA as the best Airline in Nigeria.

The award was presented to the GM Ethiopian Airlines in Nigeria, Mr. Solomon Begashaw by the immediate past President of the Association,  Alhaji Aminu Agoha at its 40th Annual General Meeting which took place at Premier Hotel Ibadan on the 17th of March.

Mr. Begashaw,  while thanking the agents and the travellers that made the award possible promised to further improve on the values that made the Airline stand out.

He announced that Travelers to Ethiopia can now get their tourists visas easily through the help of registered tour operators and Travel agents in Nigeria. This was a reiteration of the message he shared in Kano while addressing Kano based travel Agents at the annual Agency Seminar.

Before now,  all travelers have to visit the Ethiopian Embassy in Abuja to procure a Tourist visa. As the headquarters of African Union Ethiopia is joining the move by AU to simplify travel within Africa by Africans The new arrangement will see selected tour operators and Travel agents assist their passengers in approaching the embassy for Tourist visa.

This new arrangement will take away one of the obstacles for tourists to Ethiopia. Ethiopia the land of Queen of Sheba is home to the largest number of UNESCO heritage sites in Africa.

Ethiopian Airlines started its flight to Enugu in 2013 but has been flying to Nigeria since 1960. Today ET flies to Lagos, Kano, Abuja and Enugu. Founded in December 21, 1945 but started operation on April 08, 1946. It operates its Major Hub at Addis Ababa a Second Hub in Togo, Lome and a Third Hub at Lilongwe, Malawi.

The Ownership is by Government of Ethiopia (100%) and the Chief Executive Officer is Mr. Tewolde GebreMariam.

Ethiopian Airlines (Ethiopian) is the fastest growing airline in Africa. In its close to seven decades of operations, Ethiopian has become one of the continent’s leading carriers, unrivalled in efficiency and operational success. Ethiopian comoeing 787, Boeing 777-300ER, Boeing 777-200LR, Boeing 777-200 Freighter and dual-class Bombmands the lion share of the pan-African passenger and cargo network, operating the youngest and most modern fleet to more than 90 international destinations across five continents. Ethiopian’s fleet includes ultra-modern and environmentally friendly aircraft such as the Bardier Q400 turboprop. The average age of the aircraft in the fleet is five years. Ethiopian is the first airline in Africa to own and operate these aircraft.