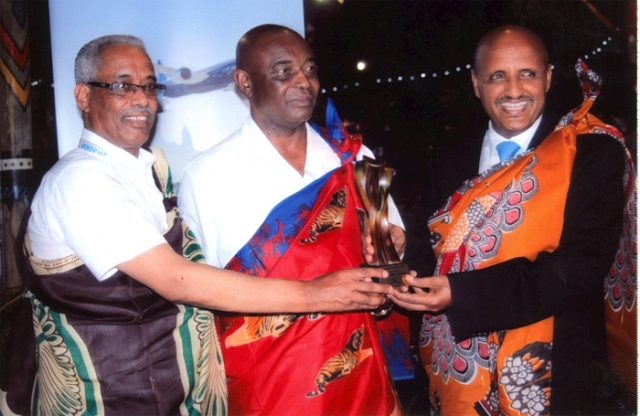 On the left is Busera Awel of Ethiopian and on the right is Mr. Tewolde GebreMariam, Group CEO Ethiopian.

Africa’s largest Airline Group, Ethiopian Airlines, has won Airline of the Year Award, for the fifth year in a row, by the African Airlines Association (AFRAA) during its 48th Annual General Assembly held on November 21, 2016, in Victoria Falls, Zimbabwe.

The AFRAA annual awards recognise excellence in service delivery, innovation and competitiveness in airlines, individuals and service providers in the African aviation industry.

Ethiopian has been applauded for its outstanding financial performance, technological leadership and investment in modern fuel efficient fleet, exemplary cooperation with other African carriers, significantly expanding route network in Africa and beyond, growing cargo operations with the largest cargo fleet on the continent and huge investment in MRO and training facilities to support the African Aviation.

While receiving the award, Ethiopian Group CEO, Mr. Tewolde GebreMariam, remarked, “We are highly honored for this recognition by fellow sisterly airlines in Africa, for the fifth consecutive year. The award underscores the continuous efforts and hard work of Ethiopian employees who are striving day and night to surpass customers expectations. Ethiopian is also grateful to its loyal customers for giving us the opportunity to serve them, for travelling on Ethiopian in great numbers, for their continued feedback and support which, in turn, assisted us in enhancing the airline‟s service excellence. He added, “Although Africa is registering rapid economic and travel growth, this growth is primarily benefiting non-African carriers. I would like to remind fellow African Airlines that African aviation holds a very strong future with vigorous fundamentals for aviation to thrive, only if, we Africans look inwards in the continent to leverage on the available internal resources to create synergy through collaborative partnerships in areas of training, technical and management support. Most of all, realizing one single unified market without any restriction for African airlines is no more an option.”

“This is a testimony of the soundness of our Vision 2025 fast, profitable and sustainable growth strategy and once again, Ethiopian welcomes this award with great pride.”

Meanwhile, the airline has announced that it will start four weekly flights to Victoria Falls, site of the most spectacular waterfalls in the world, as of March 26, 2017, with the latest B737-800 New Generation with Sky Interior.

Victoria Falls, one of the Seven Natural Wonders of the world, is the only waterfall in the world with a length of more than a kilometer and a height of more than hundred meters.

Commenting on the development, Mr. Tewolde GebreMariam, Group CEO Ethiopian Airlines, said “It is a continuation of our efforts to achieve the goal of connecting Africa to the world, by adding multiple points in Africa and serving air connectivity needs of the continent. Tourist travelers and vacationers from major cities in the Americas, Europe, Asia and Africa will enjoy hasslefree connections to Victoria Falls via our strategic hub at Addis Ababa. Looking forward, we shall continue to expand our network in Africa to better promote and facilitate growth in the business and tourism sectors, as clearly outlined in our fifteen years growth strategy, Vision 2025″.

Ethiopian commands the lion’s share of the pan-African passenger and cargo network operating the youngest and most modern fleet to 95 international destinations across five continents.