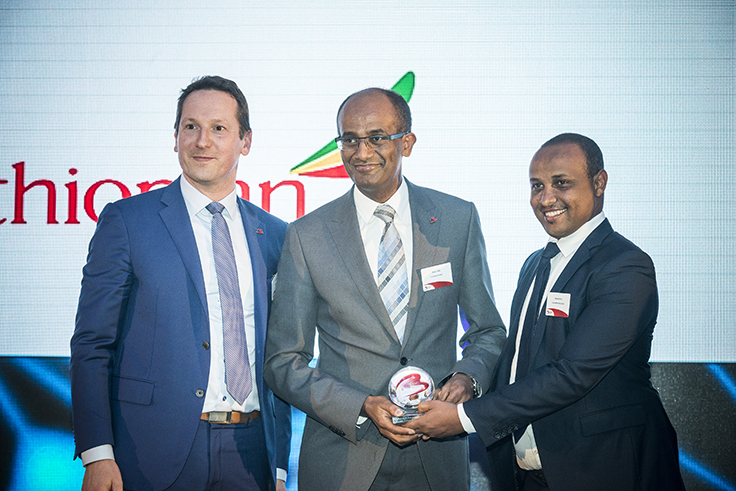 The Network Development Awards are presented to airlines that have developed new routes or achieved a remarkable growth in passengers or cargo.

As a result, the ‘Network Development Award Cargo Airline’ award was awarded to Ethiopian Cargo in recognition to the commitment of the airline to rapidly expand its cargo network and for becoming the largest cargo airline at Brussels Airport in just 6 months period.

Speaking on the development, Ethiopian Group CEO Mr. Tewolde GebreMariam said, “We are very pleased to be the winner of such a prestigious award. The award boosts our energy to serve our customers’ air cargo needs better. Ethiopian Cargo Services connects African Economies with the rest of the world in import of Industrial Goods and Export of commodities which are both the engine of the socio Economic Development in today’s highly globalized world. With Six (6) new and modern B-777F and two (2) B-757F all cargo airplanes complemented by the vast network of belly hold capacity on our passenger wide body airplanes, Ethiopian Cargo is currently the largest cargo airline in the continent of Africa.

“We are grateful to our dedicated cargo team, our Global cargo customers and particularly to our Belgian partners who have made our cargo Hub in Europe a resounding success. With the inauguration of the largest and the most modern Cargo terminal in Africa, with annual cargo capacity of 600 thousand tons, in the coming couple of months; we will transform Addis Ababa as one of the best Cargo Hubs in the air cargo industry”, he said.

Ever since the first cargo charter operation was launched to Nairobi in 1946 and the boom of agriculture export products out of Ethiopia, Ethiopian Cargo Services has been steadily growing. With our six Boeing 777- 200LRF freighters and two Boeing 757-260 freighters, we serve 36 cargo destinations in Africa, the Gulf, the Middle East, Asia and Europe with an average daily uplift of 650 tons on top of the belly hold capacity to over 90 destinations in our network with daily average uplift of 150 tons. In line with the Vision 2025, Ethiopian Cargo is building one of the largest and most modern cargo terminals in the world with an annual capacity of 1.2 million tons and planning to serve 47 destinations using 18 freighter aircraft. Ethiopian Cargo is also automating its entire cargo business process with one of the best Cargo IT systems (SITA Champ Cargo Spot) with the aim of providing the most efficient air cargo services within, to and from Africa.

Ethiopian is a multi-award winning airline registering an average growth of 25% in the past seven years.