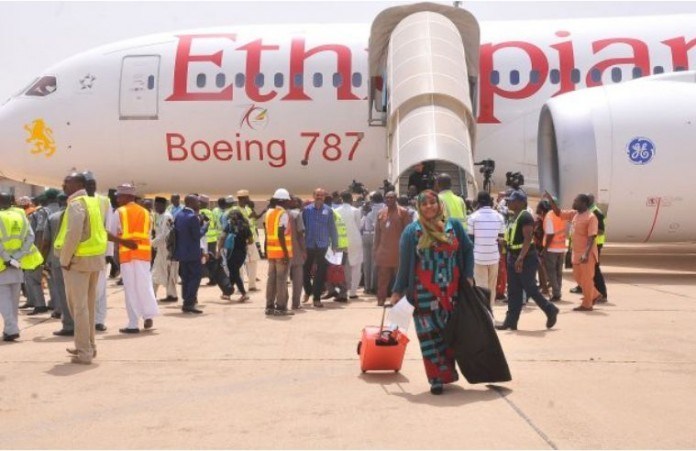 Ethiopian Airlines assures Passengers in the North and the South of Nigeria of its planned return to Enugu and Kano Airports once the new Terminals are officially declared open for Operations.

It is also one of the Airlines that operate into MAKIA in Kano. Ethiopian has been Operating into Nigeria since 1960 and have stayed with Nigeria during good and difficult times.

When the Abuja Airport was closed for repairs, Ethiopian airlines was the only International Airline that flew to the alternative Airport in Kaduna.

The airlines in a statement signed by Shimeles Arage, General Manager for the airline in Nigeria, said it is eager to provide its passengers with its traditional World Class Service in the most technically advanced Aircraft in the World.
Ethiopian is the First Airline to bring the B787 Dreamliner to all the 4 Airports in Nigeria. It was also the first to bring the Airbus A350 to Nigeria.

Before the Covid-19 lockdown, Ethiopian Airlines operated to 4 Airports in Nigeria. Since the gradual reopening of the Airspace in Nigeria, only Lagos and Abuja Airports were allowed for international Flights.

With the completion of the New Airport Terminals and further improvements in Covid19 Situation in Nigeria, the Federal Government has announced a phased reopening of Kano, Enugu and Port Harcourt Airports for International flights .

Ethiopian Airlines said it will soon announce schedules for flight operations to Enugu and Kano.