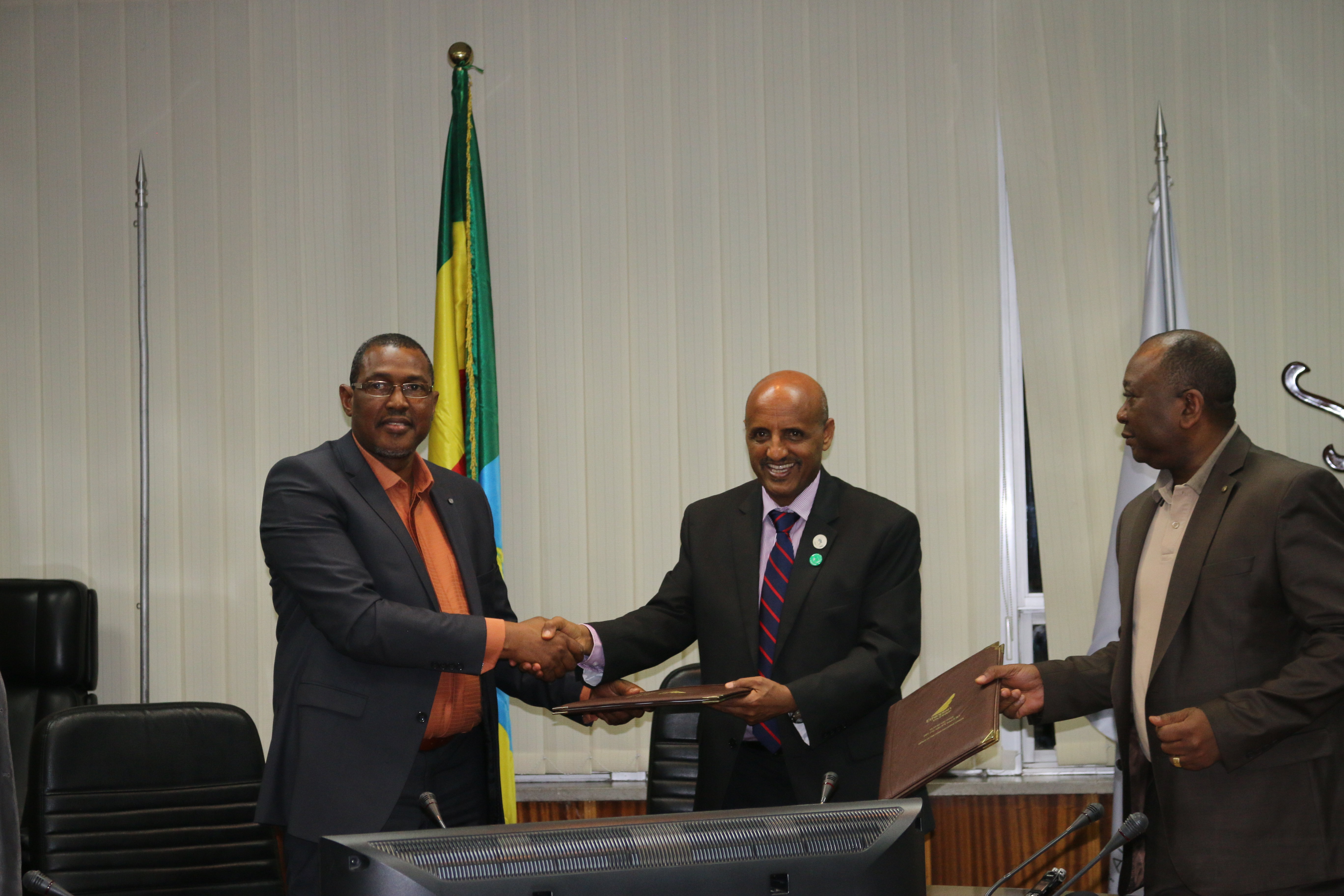 Ethiopian airline has announce that it has signed an Agreement with Guinea Airlines, for strategic partnership in management, maintenance and training, on January 30, 2018 at Ethiopian headquarters.

Speaking at the signing ceremony, Mr. Tewolde said, “As part of our Vision 2025 and with a view to enable African airlines to regain market share for travel, to from and within the continent, we are establishing strategic partnerships with many African countries. This partnership is in line with the recently launched African Single Air Transport Market at the African Union Heads of State Summit in Addis Ababa.

“We are partnering with Guinea Airlines and other African countries because we have the capacity and the expertise to support our African brothers and sisters in the aviation sector. I appreciate the speed with which we reached an agreement with Guinea Airlines thanks to the support of H.E. President Alpha Condé. This is a trilateral partnership with Guinea, ASKY Airlines and Ethiopian Airlines with a view to fill the air connectivity vacuum in domestic Guinea market and between the Mano River countries. The time has come for Africans to join hands as one and reclaim our rightful place in the global aviation industry.”

“On behalf of Guinea Airlines CEO, Mr Cheick Dem on his part, appreciated Ethiopian Airlines for the effort to realize the establishment of Guinea Airlines. He also vowed to honor the terms of the agreement and to ensure that the partnership will indeed be a model”.

H.E. Mr. Oyé Guilavogui, the Guinean Minister for Transport, who co-signed the agreement, expressed his joy and said:  “I thank the entire delegation that accompanied me for the realization of this partnership. I am very happy with the Ethiopian side who deployed a lot of efforts for the signing of this agreement. We hope that by the end of June, our aircraft will start flying to Conakry, neighboring countries as well as regional capitals.”

The Honorable Minister also noted that there are some prerequisites to be fulfilled on the Guinean side so to establish the airline no later than the end of June.

Meanwhile, Ethiopian Aviation Academy (EAA), the largest and the most modern aviation academy in Africa, a full ICAO TRAINAIR Plus Member and IATA Authorized/Accredited Training Center, has graduated 14 aircraft technicians from Nigeria, Tanzania and Cote D’Ivoire, who successfully completed classroom and on-the-job training on the Q-400 and B737 aircraft for a period ranging between one to six months.

Speaking at the graduation ceremony, Mr. Solomon Debebe, MD EAA said, “As part of our pan-African Airline, the aviation academy needs to build skilled man power in the African continent. Today’s trainees are models for this objective. I also believe that the training they attended would be contributing positively towards their performances as they return back home.”  The trainees have extended their gratitude to the Academy for the professional service rendered to them. They also pointed out that their stay at the Academy was fruitful, warm and very educating. Ethiopian Aviation Academy expects to receive more trainees from these countries and others in Africa in the months to come.