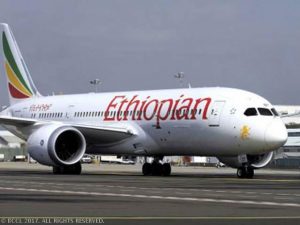 Sao Paulo, the biggest city in the Brazil and in the southern hemisphere, is the economic and financial hub of the country hosting the headquarters of numerous major corporations.

Speaking on the development, Group CEO, Ethiopian Airlines, Mr. Tewolde GebreMariam, said; “We are delighted to offer our customers a faster and reliable connectivity between Africa, Middle East, Asia and Brazil with one of the shortest total Travel Time, operated with our state of the art fleet, Boeing 787. Moreover, while operating amidst of the fastest trade lane, our flight to Sao Paulo has been providing efficient connections with 30 weekly flights to 5 destinations in China, 28 weekly flights to India, 14 weekly flights to Telaviv, 14 weekly flights to Beirut and almost daily flights to 55 cities across Africa.

“In December, we shall complement our nonstop service with a fifth flight frequency(Sun/Mon), which will enable tourists and business travelers enjoy convenient connectivity options to/from more than 100 Ethiopian global passenger and cargo destinations. Furthermore, this move will also be an impetus to consolidate the multiple ties between Africa and Brazil”, he said.

Ethiopian made its debut flight to Sao Paulo in 2013; coordinating its schedules with its partner airline in West Africa, ASKY, to give short, seamless and convenient connections to West Africa passengers travelling to and from Brazil.

Brazil is the largest national economy in South America with diversified economy including agriculture, industry, and a wide range of services such as ecotourism, leisure and cultural tourism.

Ethiopian Airlines is the fastest growing Airline in Africa. In its seventy plus years of operation, Ethiopian has become one of the continent’s leading carriers, unrivalled in efficiency and operational success. Ethiopian commands the lion’s share of the pan-African passenger and cargo network operating the youngest and most modern fleet to more than 100 international passenger and cargo destinations across five continents.