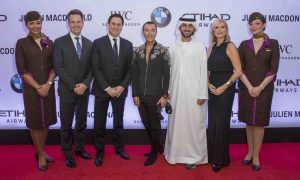 The airline took the opportunity to screen its new promotional fashion film, titled ‘Runway to Runway’, which was launched on 7 September on the opening night of NYFW: The Shows in New York. Featuring 17 of Macdonald’s couture outfits, and WME | IMG models, the short inflight film draws parallels between the production of a high-end fashion show and the preparation that goes into ensuring a safe and comfortable flight. The film was directed by award-winning director Paul Butterworth and also features unique integrations with global brands IWC Schaffhausen and BMW. 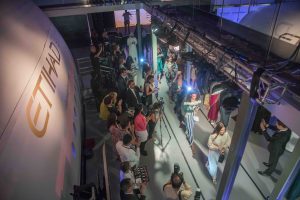 From its Abu Dhabi base, Etihad Airways flies to, or has announced plans to serve, more than 110 passenger and cargo destinations in the Middle East, Africa, Europe, Asia, Australia and the Americas. In 2013, it placed firm orders for 204 aircraft, which included 71 Boeing 787s, 25 Boeing 777Xs, 62 Airbus A350s and 10 Airbus A380s.