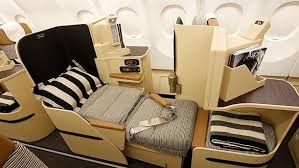 Etihad Airways, the national airline of the United Arab Emirates, which also operates daily into Lagos from its hub in Abu-Dhabi,  has been named Best First Class and Best Long Haul Airline in Middle-East and Africa at the AirlineRatings.com 2016 Airline Excellence Awards.

AirlineRatings.com, the world’s only comprehensive safety and product rating portal, celebrates and promotes excellence in the airline industry.

The pinnacle of these efforts is its annual Airline Excellence Awards, which are decided by AirlineRatings.com’s editorial team.

“Etihad’s commitment to excellence appears to know no bounds. The airline’s new First class and Business class offerings are breathtaking and have set a new benchmark in luxury travel.

“In its first 12 years, Etihad Airways has stamped itself not only as a major force in the airline industry but a trendsetter – an incredible achievement.

“Etihad Airways has an uncompromising attitude to excellence. For the airline, only the best will do”, Etihad Airways’ Chief Commercial Officer, Peter Baumgartner, said.

He said the prestigious awards were a vote of confidence in the UAE flag carrier’s innovation strategy and guest experience design and delivery.

“Over the past 12 months, Etihad Airways has completely reimagined the flying experience with the launch of our next-generation cabins on board the Airbus A380 and Boeing 787-9 Dreamliner.

“These awards are further proof that the experience we offer in First Class, as well as in Business and Economy, has set a new global benchmark for air travel and that Etihad Airways is continuing to exceed travellers’ expectations.”

Etihad Airways’ success at the AirlineRatings.com Airline Excellence Awards follows a succession of accolades for Etihad Airways’ guest experience during 2015.

Etihad Airways began operations in 2003, and in 2014 carried 14.8 million passengers. From its Abu Dhabi base, Etihad Airways flies to or has announced plans to serve 113 passenger and cargo destinations in the Middle East, Africa, Europe, Asia, Australia and the Americas.