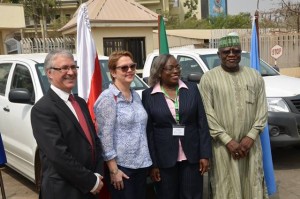 The presentation was made at the UN House Abuja by the EU Deputy Head of Delegation, Mr. Richard Young.

This support is part of an ongoing project, Response to Drugs and Related Organised Crime in Nigeria funded by the EU while the United Nations Office on Drugs and Crime (UNODC) are the technical partners.

The Toyota Hilux vehicles were distributed based on the outcome of an assessment carried out on the Agencies. Ten of the vehicles were given to NDLEA and one to NAFDAC.

According to Mr. Young, the objective of the EU project is to support the country’s fight against narcotics.

“This project is to support Nigerian Government in its efforts to fight illicit drug production, trafficking and use. It is also to curb related organized crime including counterfeit narcotics and psychotropic substances”.

The EU envoy listed some of the achievements of the project in the last one year to include the review and implementation of the National Drug Control Master Plan, strategic drug control approach, 29 law enforcement training courses, training of 1,000 health practitioners in charge of drug abuse treatment and care as well as school based enlightenment programmes.

UNODC country representative Ms. Cristina Albertin said that the result of priority operational needs assessment recommended that the bulk of the vehicles be given to NDLEA.

“The assessment found NDLEA to be in dire need of operational resources to sustain its mandate. One of the key operational resources lacking was vehicles with which to effectively patrol the borders, transport officers to critical areas and conduct surveillances on drug trafficking suspects. This significantly hampered its ability to effectively combat drug trafficking within Nigeria”.

NDLEA Chairman/Chief Executive, Col. Muhammad Abdallah thanked the EU UNODC and other partners for the donation which he said was one of several benefits of the project.

“I sincerely thank the EU, UNODC and other partners for the priceless benefits of collaborating with them. The vehicles will no doubt help to boost our operation in drug control. Prominent among the gains of the EU funded project is the nationwide consultative process that led to the formulation and endorsement of the National Drug Control Master Plan (NDCMP) 2015-2019 whose implementation started last January. The Agency will continue to partner with the EU, UNODC and other stakeholders in the fight against drug trafficking”.

NAFDAC Director of Administration, Mrs. Yetunde Oni while commending the EU for the donation also requested for more vehicles to effectively cover other sensitive areas in the country.

“NAFDAC assessment should not be limited to Lagos alone because there is plenty of work to be done in Kano, Onitsha, Aba and Enugu. We shall continue to partner with stakeholders” she pledged.