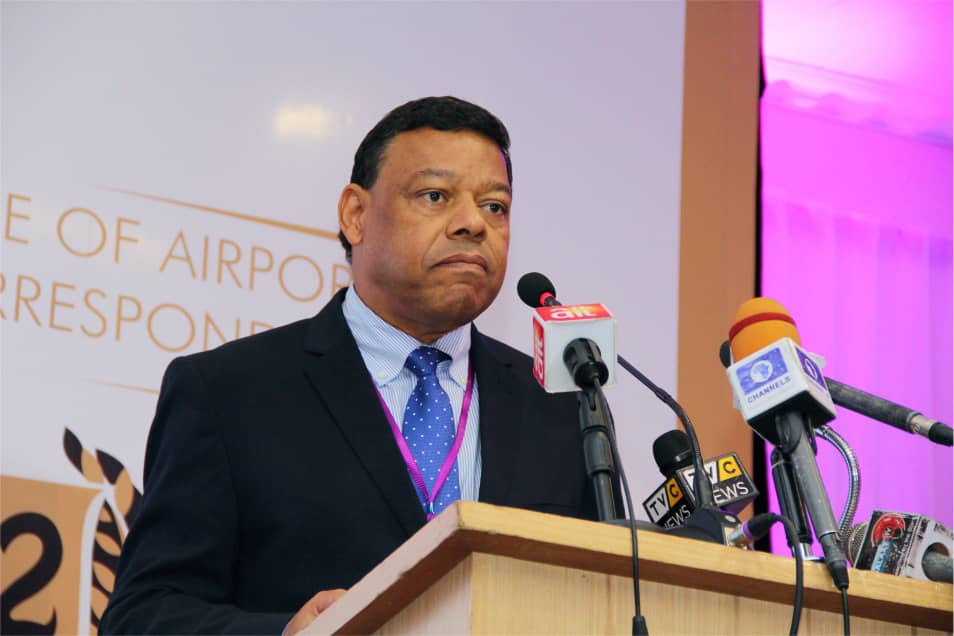 Former Secretary-General of African Airlines Association (AFRAA) and Chief Executive Officer of African Aviation Services Limited, Mr. Nick Fadugba, has called on operators of airlines in Africa to cooperate and partner in areas that are critical to the survival and growth of the business.

He made this call while delivering a speech on Partnerships: Key to Survival of Domestic Airlines at the  22nd Seminar of League of Airports and Aviation Correspondents (LAAC) which held in Lagos on Thursday.

He lamented that while airlines in Europe, United States of America and other continents continue to explore the benefits inherent in partnership, those in Africa were yet to see the importance, hence they are stunted.

Fadugba noted that the cooperation among European airlines is such that one of their airlines is stronger and healthier than five airlines in Africa, when put together.

This, he said is as a result of their partnerships in areas such as Interlining, code-sharing and joint operations.

Fadugba, who noted that the success being recorded by Ethiopian airline is largely due to its partnership with other airlines, urged African airlines to cooperate in other areas including training, MRO, Spares pooling, joint purchases, with lessors, banks, Original Equipment Manufacturers (OEMs), among others, saying it is the only way to succeed in airline business.

“…because it is difficult to launch and sustain an airline in Nigeria and in Africa in general, operators must therefore strategise to survive in an environment that is difficult to do so. They must adopt a Win-Win Partnerships. How many airlines are into partnership? In this complex world of aviation, partnership is the only way to succeed, it is a way of moving forward, the airline in Nigeria are not working together because they are competing.

“We have many airlines in Africa but are not cooperating and not pooling the fleet. Nobody will establish an MRO for an airline with only five aircraft but they can partner with aircraft lessors, manufacturers or banks. It is unfortunate that we are collectively losing money, especially in Nigeria, Nigeria is the most significant market to Ethiopian airline which operate in partnership in this chain: Ethiopian Airlines / ASKY / Malawian Airlines / Zambia. We also have the instance of  IAG:  BA / Iberia / Aer Lingus / Vueling  and Delta / Virgin; Air France / KLM; LATAM.

“At least, we should emulate Ethiopian airline because partnership give us access to market and Ethiopian is benefiting from the liberalisation of West Africa, it is reported that the airline has a turnover of almost $3billion and about $350million net profit”, he said.

He lamented that the Yammousoukro declaration is still not implemented 30 years after ‘because we need strong airlines to benefit from it. To some it is threat, to others it is not, yet we have to open our skies but must prepare for it.

While urging Nigerian government to adopt the aviation policies of Singapore and Dubai city, Fadugba noted that the strong hub airports are key to airline connectivity.

He said Nigeria seems to be losing the concept of connectivity because there are no bridges, light rails, which he said are important to airline connectivity.

“Lagos is the hub of West Africa but what are we doing about it, Ghana is moving forward because we are not harnessing Lagos airport as a hub.

He called on Nigerian government to create enabling environment for airlines to thrive.

“Nigeria does not yet have an enabling environment for aviation, there are currently, uncertainty over Government’s National Carrier Strategy / Arik Air / Aero, this is the first time I am seeing government claiming ownership of three airlines, something need to be done, Government should adopt Singapore and Dubai Aviation Model”, he added.