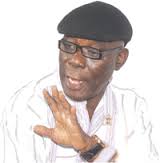 The Omaghomi family on Wednesday, announced the death of Captain Tito Augustine Omaghomi, who died on
January 3, 2016.

The information was contained in a statement signed by Dafe-Urhobo Sama, Vice-president of the Sama Foundation.

Captain Tito worked briefly with Nigeria Customs and later went to the United States of America to study flying as a pilot.

He flew with Nigeria Airways for over 25 years, and at one stage in his career, he flew some past Heads of State while he was in the presidential fleet. He was a Certified FAA Instructor, Training Captain and Type Rating Examiner, Director Ground Equipment – Nigeria Airways, Board Member of Nigeria Airports Authority (NAA) that later became FAAN/Nigerian Aviation Handling Company (NAHCO), representing NAHCO as Technical Adviser.

He is survived by wife, children, brothers, sisters and other relatives.

The burial arrangements, according to Dafe, will be announced by the Omaghomi Family.

“On behalf of the Captain Dafieko Sama Foundation, I wish our beloved President a peaceful rest in the bosom of the Lord”, he said.
By: Sade Williams