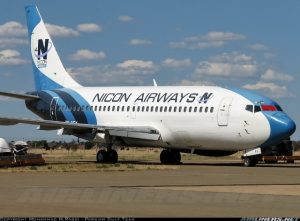 The Bankruptcy Notice was signed on behalf of the Chief Registrar of the Court upon a petition for bankruptcy presented by Mr. Henry Iwelumo, Mr. Lukman Kolawole, Mr. George Omoniyi and Mrs. Eunice Odey, for themselves and on behalf of creditors and representing all members of staff of NICON Airways Ltd, whose salaries and allowances have not been paid by Jimoh Ibrahim since May 2007.

A copy of the Petition filed at registry of Federal High Court Lagos and obtained by The Travel Port, revealed that on 16th September 2013, the National Industrial Court Abuja in Suit No NICON/LA/192/2011 awarded the judgment sum N1, 545, 412,134 in favour of Ex-staff of NICON Airways against Bar. Jimoh Ibrahim.

Honourable Justice Esowe of the National Industrial Court in the Judgment above, lifted the veil of corporate liability of NICON Airways and held Barr. Jimoh Ibrahim personally liable for fraud against the ex staff of NICON Airways and directed him to pay the arrears of salaries and all deductions on their salaries which never remitted for their pensions.

The Court held that gone are the days where people under corporate personality lure workers to work for them and ran away with their salaries and entitlements on the guise that it is the company that owes them. Barr. Jimoh Ibrahim through his lawyer, Bolaji Ayorinde filed an appeal against the Judgment but the appeal was dismissed on the 23rd day of May 2017 by Honourable Justice E. N Agbakoba who insisted that her court cannot be used as engine of fraud and therefore directed that Jimoh must pay the workers.

The workers had earlier tried to attach the shares of Jimoh Ibrahim at Corporate Affairs Commission (CAC), but Jimoh used his contacts as a former chairman of the Corporate Affairs Commission to change the shares to the names of his children. A copy of such claim was filed by his lawyer at the National Industrial Court claiming that Jimoh Ibrahim no longer has shares in NICON Luxury Services Ltd, NICON Group of Companies Plc, Global Fleet Building Limited, Global Fleet Oil And Gas Limited, Maiden Hotel Limited, Global Fleet Industries Limited And Nicon Investment Limited etc.

The workers have now petitioned the Federal High Court for a Receiving Order against CHIEF (DR.) JIMOH IBRAHIM and empower the workers to take over his business interest in all companies connected to him.  The workers are asking for the following prayers.

The other consequential orders are as follows:

*Empowering the Creditors to sell the Debtor’s properties (be it landed or chattels) wherever situate and/or found either by private treaty or by public auction to be published in two widely read Nigerian National Daily or Nationally Circulated Newspapers.

*An Order granting leave to the Creditors to appropriate or otherwise utilize the investments, shares or other interests of the Debtor in Global Fleet Oil & Gas Ltd., NICON GROUP and any other Company(ies)/Corporate entity(ies) in Nigeria, in partial or full satisfaction of the Debt due.

*An Order permitting /allowing the Creditors to apply the proceeds from the sale of the Debtor’s properties, Chattels, choses in action and/or interest towards liquidation his indebtedness to the Creditor/Petitioner.

Meanwhile, Ibrahim could not reached to comment on the above judgment.