Exquisite experience as Qatar Airways launches A380 flights to Guangzhou 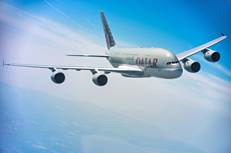 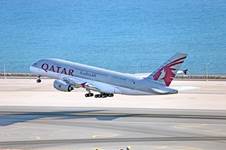 Passengers travelling to China can look forward to a premium travel experience on board Qatar Airways’ flagship A380 and Boeing B787 Dreamliners from South Africa to Guangzhou, as the airline launches its fourth A380 destination, after London, Paris and Bangkok, to Guangzhou in China.

Travellers can indulge in luxury and spacious extravagance on their way to Guangzhou for the next Canton Fair in October for which Qatar Airways is the official airline partner.

Daily flights on board the world’s largest aircraft  begins on 1 July, 2016 from Hamad International Airport in Doha.

Speaking on the development,  Qatar Airways Chief Commercial Officer, Dr. Hugh Dunleavy, said: “Qatar Airways is proud to announce the launch of A380 services to China, which will facilitate unique travel experiences and business connections alike.

“China is a growing market and Guangzhou is a destination we have now served for eight years. The placement of the A380 on this route further signals our commitment to the region and to our passengers’ travel needs”, he said.

With seamless connecting time from Africa to China, all travellers can experience Qatar Airways’ award-winning hospitality on board the airline’s A380 and B787 aircraft, with impeccably designed customised interiors, and also the luxurious experience of the airline’s Al Mourjan Business Lounge in Hamad International Airport, redefining the business travel experience.

By combining a masterpiece of aeronautic engineering with refined on board hospitality, Qatar Airways proudly offers its passengers a flight experience like no other.

Whether travelling for business or leisure, Qatar Airways’ new Boeing 787 Dreamliner is an exemplary choice for flying from Africa to Doha.

The airline’s A380 connecting flight from Doha to Guangzhou features a tri-class configuration of seating in First, Business and Economy Class, over two decks.

The A380 is the largest passenger jet in the world and will provide customers with unparalleled levels of comfort reflecting a truly world-class experience.

From the warm welcome upon arrival to the state-of-the-art entertainment system, to the delicious gourmet dining in the sky and exquisite comfort of the cabin.

Qatar Airways has also introduced a new generous baggage allowance on any Qatar Airways ticket booked on or after 18th April 2016 originating from any one of our 21 points of origin in Africa.

All Privilege Club members will be offered an additional allowance; 10kg for Silver tier holders, 15kg for Gold tier and 20kg for Platinum tier.

Qatar Airways, the national carrier of the State of Qatar, is one of the fastest growing airlines operating one of the youngest fleets in the world.

Now in its 19th year of operations, Qatar Airways has a modern fleet of 184 aircraft flying to more than 150 key business and leisure destinations across six continents.

Qatar Airways is a member of the oneworld global alliance. The award-winning alliance was named the World’s Best Airline Alliance 2015 by Skytrax for the third year running.

It  was the first Gulf carrier to join global airline alliance, oneworld, enabling its passengers to benefit from more than 1,000 airports in more than 150 countries, with 14,250 daily departures.

In 2015 Qatar Airways launched Oryx One, an enhanced interface for its inflight entertainment system, increasing the number of movies and TV shows on board from 950 to up to 3,000. Passengers flying on Qatar Airways flights served by its B787, A350, A380, A319 as well as select A320 and A330 aircraft can also stay in touch with their friends and family around the world by using the five-star airline’s on-board Wi-Fi and GSM service.

Qatar Airways is one of the world’s leaders in sponsoring global sporting events, including the strategic team sponsorships of FC Barcelona and Al-Ahli Saudi Arabia FC. Qatar Airways’ strategy reflects the values of sports as a means of bringing people together, something at the core of the airline’s own brand message – Going Places Together.