FAAN at ACI, seeks collaboration among stakeholders for sector’s development 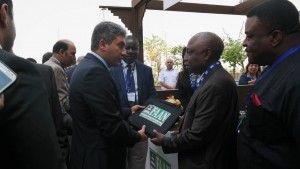 The MD/CEO of FAAN, Engr Saleh Dunoma welcomes the Egyptian Minister of Civil Aviation, Sherif Fathy to the podium of Federal Airports Authority of Nigeria at the opening ceremony of ACI Africa Regional Conference and Exhibition in Cairo, Egypt from 10 – 12 April 2016.

The Federal Airports Authority of Nigeria (FAAN), said it will continue to play a leading role in advocating collaboration among aviation stakeholders to address major challenges in development of the air transport sector in Africa.

Managing Director of FAAN, Engr. Saleh Dunoma, stated this while receiving the Egyptian Minister of Civil Aviation, Sherif Fathy at the exhibition stand of FAAN at the 55th Airports Council International (ACI) Africa board meeting and Regional Conference and Exhibition taking place in Cairo, Egypt, April 8 – 12, 2016.

According to him, the Federal Government of Nigeria is attracting private investors to partner and work with the Government to explore the various opportunities in the sector.

According to him, “Nigerian airports are playing important international roles in linking the most populous country in Africa to the rest of the world, and it is constructing four new terminals to increase its capacity for facilitation and processing”. Earlier, while declaring the conference open, the Egyptian Minister of Aviation had said that his country was planning to boost capacities of its key airports.

Angela Gittens, the Director-General of ACI worldwide, said the theme of the conference “Economic sustainability of African airports: Challenges and opportunities” would address improvements in aviation safety and security in the light of new threats affecting the industry.

In his welcome address, Pascal Komla, president of ACI Africa had noted that the conference provided a unique opportunity for aviation executives, experts and exhibitors from across the globe to network, share information and forge a common vision for the future businesses of African airports.

The 55th ACI Africa Board meeting and regional conference and exhibition presented a platform for industry experts to come together and explore the challenges faced by the continent and find solutions that would boost the economic growth of Africa.