FAAN seeks synergy among agencies over security breaches at airports 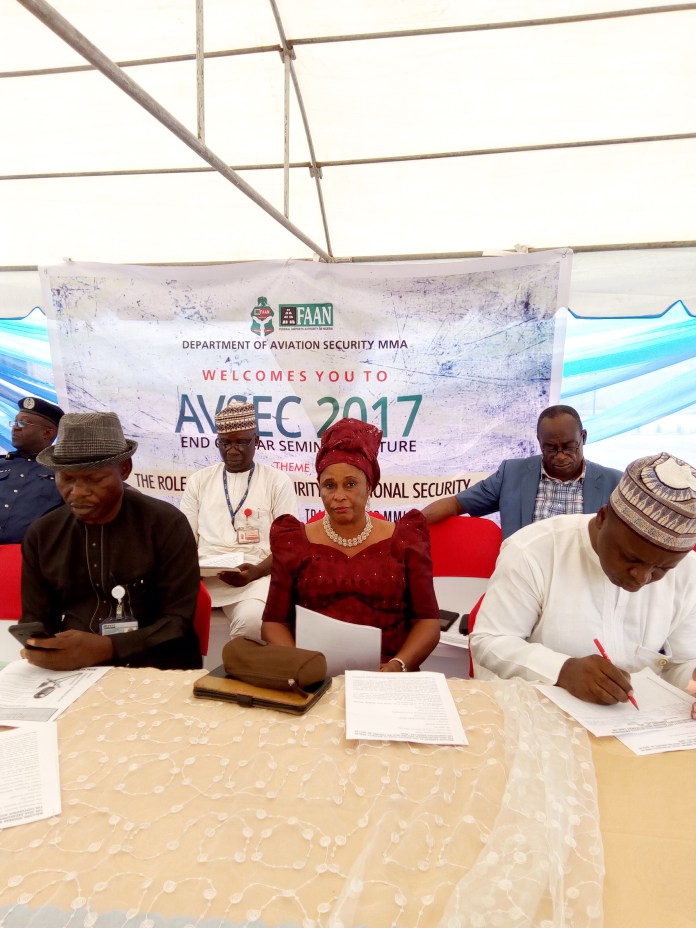 Director of Aviation security, Federal Airports Authority of Nigeria (FAAN), Retired Group Captain Usman Abubakar Sadiq, has called for synergy among security agencies across airports in the country to stop the incidences of security breach at airports.

He also noted that information sharing was key to collectively tackle any security issues that might arise, adding that no security agency can work in isolation or handle security matters alone and achieve success.

Sadiq, who stated this at the annual lecture/seminar of the Aviation Security Department at the Murtala Mohammed International Airport, Lagos with the Theme: Aviation Security: An integral part of National Security, noted that AVSEC plays an integral part of National security as its statutorily charged with the responsibility of providing security services at airports nationwide.

He stressed that this responsibility was clearly spelt out in ICAO Security Manual DOC-8973-” Safeguarding Civil Aviation Against Unlawful interference” which includes the safety of passengers, airlines, ground personnel, crew members, the public and facilities.

According to him, every security agency play a role in the overall security of the nation and as such all must not carry themselves as being superior to the other  but must work as partners in progress to ensure the airport as an entry point was safe and free of security breaches.

” Thus, as the security architecture or security sector is not complete without the military, police of intelligence  service so also is the absence of aviation security in national security set up is  incomplete due to the specialized security service it renders”, he said.

Sadiq, who was represented at the event by the acting General Manager, Administration FAAN, Mr. Ben Ailemen said,” the most important thing is to consider the present state of collaboration among security deployed to our airports. There exit gaps in the areas of cooperation, information sharing and synergy which need to be closed in order to meaningfully tackle the security challenges facing the nation”.

In his welcome address, the Airport Chief of Security, MMIA, Mammam Sadiku reiterated that AVSEC capacity was not only to effectively Sumount the present challenges bordering on airside security but to assure adequate security and protection of all stakeholders and investment.

He expressed appreciation to the FAAN management for their support in carrying out their duties.

“I am excited to add that the highest level of the Authority’s Management, an enviable leadership , commitment and support has been displayed again and again in an unequivocal manner. For this, we are grateful and are rededicated to achieving the core mission of developing and profitably managing customer-centric airport facilities for safe, secured and efficient carriage of passengers and goods at world- class standards of quality”.

Contributors to the lecture stressed the need for heads of security agencies at the airport to give importance to meetings held monthly to discuss security matters and the way forward.

Security service Manager, Nigeria Aviation Handling Company, NAHCOaviance, Commodore Mohammed Lawal Badamasi expressed displeasure over the less importance given to such meetings when subordinates of heads of agencies are sent to represent their bosses.

He said, it does not say well of that officer, adding that subordinates  might not be able to explain in details all that transpired during the meeting and also, there would never be a feedback.

” I think we have not given security the needed importance it deserves, airport security committee meetings you have heads of security agencies that are suppose to be the main people but they do not attend, rather they send all sorts of representatives, that shows the level of importance they attach to that important decision making body”.

Aviation security officers lamented the challenges they face on a daily basis especially in the hands of ministers, governors and other dignitaries.

They say these group of people refused to be screened of even use their aides to harass them.