FAAN sets up panel to probe fire incident at headquarters 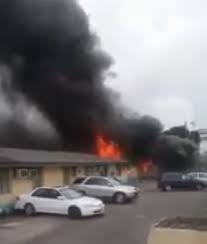 The Federal Airports Authority of Nigeria (FAAN) has constituted a panel of inquiry to investigate the fire incident that occurred at its headquarters in Lagos.

The Managing Director of the Authority, Engr Saleh Dunoma made the disclosure  while addressing a press conference after he inspected affected areas alongside his management team.

In his words, “ the committee , which will comprise representatives from the Nigerian Police Force, Nigerian Civil Aviation Authority, Accident Investigation Bureau, the Authority’s Director of Security Services, representatives from Fire department, Safety department and Legal. The Legal representative would also serve as the Secretary to the panel.
The committee would basically investigate the entire incident, with a view to evaluating the immediate and remote causes of the fire, determining the extent of damage, making recommendations to forestall future reoccurrence, amongst other issues that may arise during the cause of their investigation.

While stating that the committee is expected to turn in their reports within the next two weeks, the MD noted that the Nigerian Police Force would also continue its parallel investigation to unravel the cause of the incident.

While apologising to the general public and road users around the FAAN headquarters for inconveniences that might have arisen within the period of the incident, he affirmed that the Authority will not shut down its headquarters as operations will continue, since a larger section of the offices was not affected.