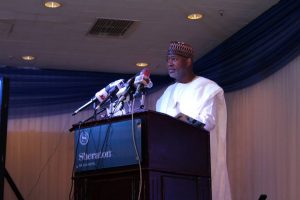 As part of efforts to reposition aviation agencies, and with the belief that a well-motivated workforce would result in improved service delivery and optimum productivity, the Minister of State, Aviation, Senator Hadi Sirika has approved the massive clearance of promotion backlogs in the agencies.

According to the Minister, the approval has been given in order to fill vacancies which had been created as a result of earlier promotions, retirements and reliefs, and to further boost the morale of staff of the agencies who had stagnated over time.

The Federal Government has also approved some reorganizations at the Federal Airports Authority of Nigeria (FAAN) and inter-agency postings to ensure better productivity and efficiency.

Among the approvals, is the appointment of Mrs. Victoria Shin-Aba as the new Airport Manager, Murtala Muhammed Airport,  Lagos, a position formally held by Nehemiah Auta who has been redeployed to the FAAN Headquarters as Deputy General Manager, Operations.

A new General Manager, Accounts, Kabir Mohammed has also been appointed for the Authority.

Similarly, the Director, Finance and Accounts (FAAN) has been redeployed to the Nigeria Airspace Management Agency (NAMA) in the same capacity, while the Assistant General Manager, Air Transport Regulations, Hajia Mariam Ismail, has also been moved to the Nigerian Civil Aviation Authority (NCAA).

According to the Minister, the appointments and postings which take immediate effect, would galvanize a robust service delivery in the sector in line with the set objectives of the present Administration to reform the aviation industry.