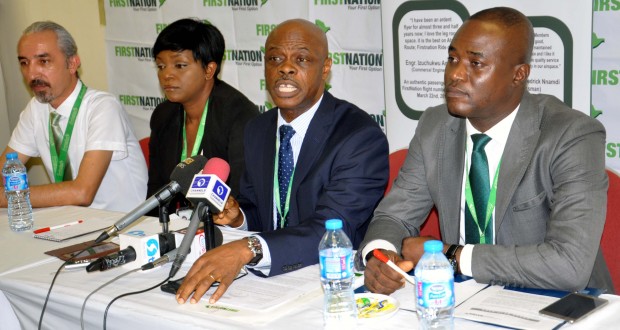 FirstNation Airways management on Tuesday said inability to source for forex to carry out maintenance and buy spares at scheduled time, coupled with some other issues, led to its voluntary grounding of its two A319 aircraft.

Capt. Chimara Imediegwu, director of flight operations at a briefing in Lagos, explained that one of the aircraft had just arrived the country from heavy maintenance  while the other was on the queue to go for maintenance but unfortunately, the former one developed a fault, prompting the airline to call the manufacturers in for urgent maintenance.

He added that while going through these, the Nigeria Civil Aviation Authority (NCAA) was well informed, adding that it had always planned ahead.

“The challenges of sourcing forex with constantly changing Central Bank of Nigeria (CBN) policies and Rate of Exchange, leaves us sometimes in situations where aircraft parts cannot be obtained when ordered due to banks’ inability to transfer  funds based on bids and maintenance schedules programmed with external maintenance and repair organisations providers.

“The disruptions by these forex transfer issues cause are better imagined. To reduce the disruptions, operators are sometimes, compelled to receive forex from the parallel market at cutthroat, eventhough the sums required are mostly in hundreds of dollars.

“Having contended with these, the FirstNation management planned well ahead and kept the NCAA informed of the progress of the maintenance of its aircraft. We actually have just received one of them from a heavy maintenance early tcost to ayear. While preparing for the departure of the next for maintenance, the former and rejuvenated ship developed a fault.  This called for immediate action with the manufacturers, following coordinated troubleshooting with the manufacturer’s specialist, we arrived at a decision to get them to come in and do a final job on it. The Authority is constantly kept in the know, formally”, he said.

He noted further that ‘in order to remain within the Safety,  Schedule and Service, effectively regulating ourselves, FirstNation voluntarily grounded these aircraft even though at enormous cost to await the arrival of the manufacturers’ team’.

Imediegwu explained further that since the airline planned the maintenance action well ahead, it notified passengers, adding that flights are currently loaded online  effective September 15, 2016.

“This will ensure that passengers continue to enjoy safe and reliable service that the airline is reputed for. Fact is that, the current foreign exchange constraint which distrups maintenance slots, coupled with over 70 percent devaluation of Naira partly contributed in no small measure to this development”, he added.

He revealed that the airline was planning to increase its fleet as it has identified some aircraft type  but regretted that the current situation could slow down the order.

On scarcity of Jet-A1, he lamented that because there is little or no difference between aviation and kerosine, some marketers divert aviation fuel for domestic use, adding that a situation where some airlines go to Accra to get fuel was not a good development.

“This will reflect on passenger ticket and other cost”, he added.