Flydubai Plane crash in Russia kills all 62 people on board 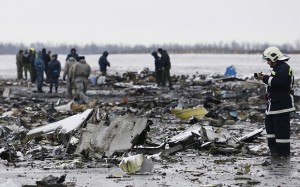 All 62 people aboard a passenger jet flying from Dubai to southern Russia were killed when their plane crashed on its second attempt to land at Rostov-on-Don airport on Saturday, Russian officials said.

Russia’s emergencies ministry said the aircraft, a Boeing (BA.N) 737-800 operated by Dubai-based budget carrier Flydubai, crashed at 0340 (0040 GMT). Most of those on board were Russian.

“The aircraft hit the ground and broke into pieces,” the Investigative Committee of Russia said in a statement on its website. “There were 55 passengers aboard and seven crew members. They all died.”

Both of the plane’s flight recorders have been recovered undamaged, the committee said in a statement.

According to the independent U.S.-based Flight Safety Foundation, there was strong wind at the airport with a speed of 43 kilometres per hour, with gusts up to 69 kilometres, but visibility was reasonable.

“Different versions of what happened are being looked into, including crew error, a technical failure and bad weather conditions,” the committee said.

Russia’s Interfax news agency cited a source in the emergency services as saying the pilot changed his mind about landing on the approach to the airport.

“For an unknown reason, several minutes before the landing, the pilot reconsidered and decided to make another circuit, but wasn’t able to,” Interfax quoted the source as saying.

Flydubai’s CEO Ghaith al-Ghaith told a news conference in the Gulf Arab emirate that it was “too early” to determine the cause of the crash.

“We will have information about the circumstances of the incident and the black box in the future, and an investigation is being conducted in cooperation with the Russian authorities and we are waiting to see the results,”