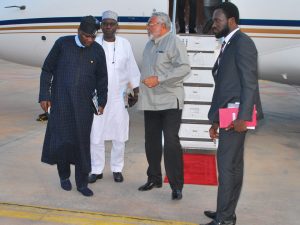 Former President of the Federal Republic of Ghana, His Excellency Jerry John Rawlings, has decried the tribal and ethnic agitations going on in Nigeria, saying such was not good for Nigeria and the African continent as a whole.

Rawlings,who said that he is not pleased at the ugly development, said that ethnicity and tribal warfare appear to be rearing itself to a dangerous level in the country, adding that such disagreements must stop.

The former President, while speaking at 12th Annual Lecture organised by the University of Ibadan Alumni Association (UIAA), Ekiti State branch, Held at the Conference Hall of Federal Polytechnic, Ado-Ekiti in Ekiti State yesterday, therefore urged Nigerians to stop the ethnic war and help each other so as to co-exist peacefully in harmony.

Rawlings in his special remarks, advised Nigerians to endeavor to get people of leadership of integrity so as to get the right people who can perform the much desired miracle, adding that Nigeria can sustain good leadership if they continue to use their tongues and votes rightly.

Speaking further at the event, Rawlings said that African challenges have to do with leadership that lacks character, stressing that “by character, I mean distinctive qualities that overcome the challenges we have as constituencies and organisations. Let’s learn to be gracious. I am sad over the mean behavior of my fellow black man. African countries are plagued with several challenges such as agriculture, deforestation, bad economy, governance, education amongst others”.

The Special Guest of Honour who said that he is worried by the rating of Nigeria and Ghana in terms of high rate of corruption by Transparency International (TI) said “Transparency International shows that countries in the South South region of Africa failed to address corruption and that Ghana and Nigeria rate high in corruption indices. However, some leaders have the will but not the character to fight corruption. The fight against corruption in Nigeria calls for integrity and wise approach so that it will not conflict with the lives of the people”. 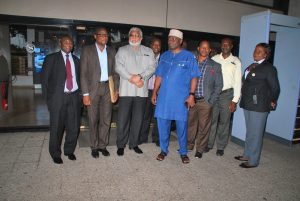 Former Ghanaian President Jerry Rawlings (3rd from left) in a group photograph with some members of the University of Ibadan Alumni Association (UIAA), Ekiti State branch

He said that when Nigeria fights corruption rightly, it will not only do well for Nigeria but Africa and the world generally, just as he maintained that Nigeria commands about 75 per cent of the African population.

“Nigeria has the pride and integrity. Most African countries cannot meddle with you people”, Rawlings said.

In his lecture, Dr. Makanjuola Owolabi stated that Nigeria’s past till now can best be summarized as one of bad leadership with mediocrity, the exact opposite of what she needs urgently for her progress and development.

Dr. Owolabi who is also the Guest Lecturer with the theme: “Leadership with Character” recommends active participation in Nigerian politics especially at the grass root levels by all those who really graduated from Nigeria Nigerian Universities and Polytechnics.

“We must also change our attitude to politics and governance of winner takes it all, of revenge, vendetta, vengeance, exclusion, extreme partisanship, wickedness and sadism which have been excluding close to 80 per cent of Nigerians in government activities and expenditures at all levels”.

He said “instead we need urgently a political class in greater numbers of good leaders with the right characters and attitudes who are ready to serve and work passionately for peace, progress and prosperity of Nigeria”.

According to Dr. Owolabi, from his aerospace and human factors insight and experience while providing statutorily mandatory training for pilots, engineers and others, there are a total of seven dangerous character traits or attitudes that are responsible for all failures, accidents and disasters in any area of human endeavors.

These traits, he listed as complacency, anti-authority, invulnerability, “peculiar Ignorance, Culture and Tradition”, impulsiveness, resignation and macho attitude or machoism”.