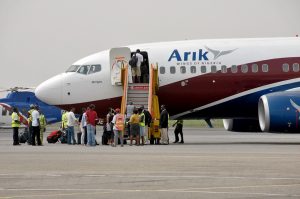 Former Vice-Chairman of Arik Air, Senator Anietie Okon has alleged that some interests in government had planned to take over Arik Air and sell it cheaply to themselves but this was forestalled by Asset Management Corporation of Nigeria (AMCON), which is currently managing the airline.

Senator Okon said the interest group took advantage of the financial distress of the airline occasioned by the crash of Nigeria’s economy that forced it into recession and the plunge of the value of the Naira.

This he said made it extremely difficult to obtain foreign exchange and run the airline, which has the largest fleet in the country, adding that the bad economy also affected some other companies in the country, which rely on forex to sustain their operations.

Okon observed that currently no Nigerian airline is benefitting properly from the bilateral agreement Nigeria signed with other countries; rather government has given away all the routes to foreign airlines at the detriment of Nigeria’s interest.

He remarked that the economic and social consequences of government not supporting the airline and other airlines in the industry include job losses, the weakening of the value of naira and recalled that Arik was selling tickets for international destinations in naira while foreign airlines continue to demand for dollars and it had 2, 600 staff against that of foreign airlines that may have at most 10 Nigerian staff.

According to him, in other societies, government would have stepped in to save the airline by providing it and others support, knowing that the economic problem was a national issue, but instead it forcefully took Arik over and today the airline is operating less than 40 percent of its capacity.

However, Okon noted that AMCON management is striving to keep the airline operating but at very low capacity, with most of the aircraft due for maintenance but without the resources to take them out for repairs, adding that at the 11th year of the airline, the former management had planned to bring in new aircraft from Boeing, the B737 MAX to take over from the existing ones while the later go for heavy maintenance. 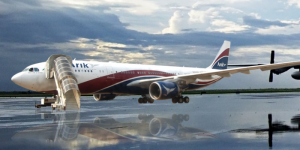 He said this was supposed to be the fleet renewal strategy of the airline, which wanted to maintain young fleet in its operations.

“The stakeholders are gearing for a rebirth of the airline. Eight aircraft are ripe for heavy checks. They are there parked and wasting away. They have degraded the maintenance culture of the company because we take the aircraft to European Aviation Safety Agency (EASA) rated maintenance facility, but we heard they now take them to Lithuania facility where the maintenance cost is cheap but even at that they cannot even pay for the aircraft they have taken out,” he said.

Senator Okon remarked that the Nigerian government “is always too willing to cut deals with foreign airlines and give our market away.

“Our country is losing so much for the selfish interest of a few”, he said.