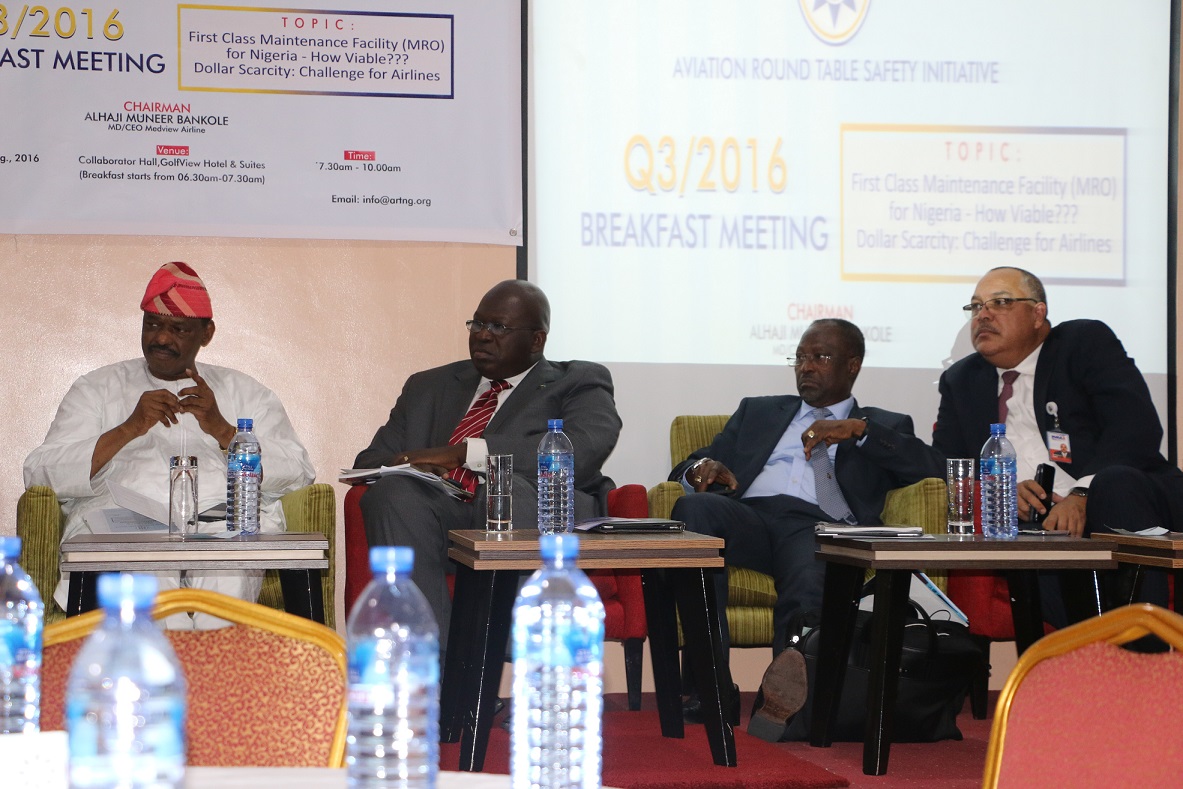 The Federal government bureaucracies and bottlenecks as well as stakeholders’ selfishness and incoherent voices, have been blamed for the continued lack of a world class Maintenance Repair and Overhaul (MRO) facility in Nigeria.

Captain Jari Williams, chief operating officer of Bi-Courtney Aviation services Limited (BASL), operators of MMA2 terminal, Lagos, while speaking at the Aviation Round Table (ART) quarterly breakfast meeting in Lagos, said ‘Nigeria is long overdue for a world class MRO facility to serve the domestic and regional maintenance requirements of the aviation industry, adding however that , ‘the noble vision was truncated due to the absence of the much required support from the stakeholders, who ordinarily should have charted a roadmap for implementing the project’.

He said such critical and very important aviation infrastructure is urgently needed to provide support for aircraft leasing business.

According to him, if the Federal government had supported the vision conceived by the Akwa Ibom state government to have such facility in Nigeria, it would have been functional by now.

“With regret, we look back at the failure of past governments in providing the required leadership to undertake this sort of project. Similarly, they failed to put in place necessary policies and legislative framework for such a project to rest on.

“The vision of a world class MRO was first conceived by the Akwa Ibom State Government and an implementation plan was put in place. Unfortunately, and to the detriment of the Nigerian aviation industry, this noble vision was truncated due to the absence of the much required support from the stakeholders, who ordinarily should have charted a roadmap for implementing the project”, he added.

He is also of the opinion that an enabling environment, good and friendly policies as well as incentives and subventions by government will also attract willing investors to partner in such projects.

He added that investing in an MRO is known to be extremely capital intensive, requires significant collaboration with other industry stakeholders, and the rate of return on investment (ROI) is rather slow. Thus, to attract willing investors,  he said the government of the day has a key role to play especially by providing juicy incentives and business-friendly policies.

On the few occasions, when either state governments and/or private investors made attempts to commence an MRO, the constant bottlenecks always frustrated the implementation of such plans.

“Clearly, there is no gain stating the fact that an MRO facility is critical to the sustainability of the aviation industry, particularly in developing the capacity for maintenance of aircraft from A to D checks. In reality, establishing an MRO entails a lot more than just building a hangar or developing the capabilities to manage the facility. There are many complimentary activities that need to be put in place to support the industry which are currently lacking at our airports.

“With specific reference to the case of Akwa Ibom State’s National Hangar project, the cost of which the state government borne 100 percent, the airport was conceived on the basic principle of providing maintenance and overhaul capabilities for the nation’s aviation sector, with a climate-controlled hangar that has the capacity to house two Boeing 747 or six 737 simultaneously. It incorporated workshops and made provisions for all the required associated facilities for a sustainable and an efficient MRO operation.

“The State also incorporated a terminal for local and international travels, with a 3.2 kilometer runway and all other ancillary facilities required to ensure safety and security are maintained. Also, the requisite staff was trained to provide the enabling environment for an MRO facility to function effectively.

“It is noteworthy that the state government did all these without any genuine support or encouragement from the critical stakeholders. Visits by different ministers of aviation, members of the National Assembly committee on aviation, investors, including recommendations by the national conference, has, so far, yielded no positive results and direction.

He regretted that aviation stakeholders clearly cannot continue to do things the same way and expect a better result, noting that it is impossible to continue running airplanes in this country without working towards creating an enabling environment and building capacity.

Williams, who noted that the provision of infrastructure and services that bring down the cost of operations with regard to maintenance of airplanes, training of engineers and provision of spare parts, is the only way the industry can maintain quality, safety and reduce cost of operations, while conserving foreign exchange, noted that all startups, especially in the critical sectors of any economy, require the support of government and the private sector.

“Funding and policy support are also key. The fact is well known that subventions in various forms have been given to different sectors in the past in Nigeria and worldwide to establish the required capabilities to drive startups. Unfortunately, this has not been the case for the Aviation sector, with regards to the maintenance of airplanes.

“Establishing an MRO will no doubt require some sort of subvention and support by government. It will also require other incentives like tax waivers, provision of low interest rates, approval of pioneer status, designation as Free Trade Zone, a well-defined policy, funding from institutional lenders such as the African Development Bank or the World Bank, technology transfer, as well as collaboration with foreign manufacturers and governments, in order to create an environment in which the industry can thrive.
“In addition to these, there must be guarantee of dedicated power supply, adequate housing, security approvals, airlines’ buy-in and the cooperation of the relevant regulatory agencies. This is the only way to ensure the success of this project and the future of an MRO operation in Nigeria that will save the industry and take it well into the coming century”, he added.