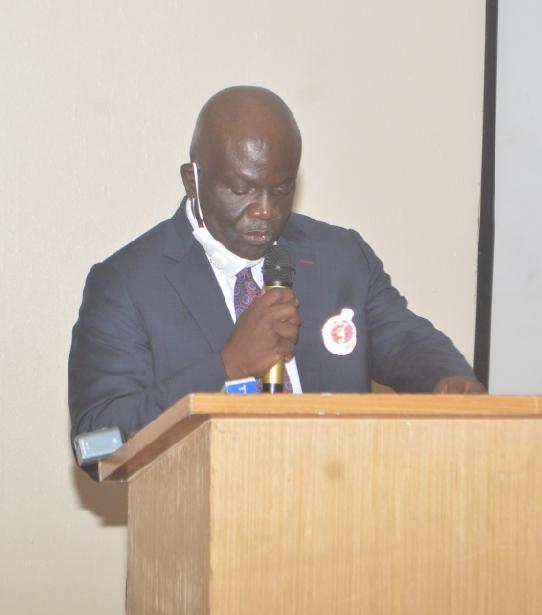 DG, NCAA, Capt. Musa Nuhu, Presenting a paper at the LAAC/AIB Conference on Preventing Human Factors in Air Accident Investigations, at the weekend

The Director General of the Nigerian Civil Aviation Authority (NCAA), Captain Musa Nuhu has called for a critical review of the relationship between the live ware components and the other components of the aviation ecosystems and devise means towards achieving safe aircraft operation thus preventing accidents due to human errors.

This is just as the National coordinator State Safety program, NCAA, Dr. Etete Ifeanyi has emphasized the role of the Quality assurance Manager within an organization stressing that their jobs need to be protected as part of the gamut for creating a system with fewer accidents.

Both submissions were made at the just concluded LAAC/AIB Conference: Preventing Human Factors in Air Accident Investigations held at the weekend in Sheraton Hotels and suites laying emphasis safe operations devoid of human errors.

He said,”I must unequivocally state that every aviation accident is a global tragedy and the industry, through the accident investigative authorities must be determined to unravel the probable causes, contributory factors and develop appropriate Safety Recommendations that are based on safety risk assessments and considerable cost-effectiveness and the regulatory authorities must enforce their implementation by certified entities and licensed personnel to prevent reoccurrence and improve safety records.

The Director General also stressed that human factors in aviation occurrences is most times seen as the negative consequence of the live ware dimension in an interactive ecosystem.

He stated that: “The Liveware is the non-standardized, most critical, least predictable, most susceptible to the effects of internal and external changes, as well as the most flexible component in the system and therefore must be carefully adapted and matched to other system components in order to avoid stress within the system and prevent its eventual breakdown.

Nuhu therefore urged the gathering to critically review the relationship between the liveware components and the other components of the aviation ecosystems and devise means towards achieving an effective and seamless safe aircraft operation and thereto preventing accidents due to human errors.

Dr. Etete Ifeanyi who spoke during the panel session accentuated the role of the Quality assurance Manager within an organization stressing that their jobs need to be protected as part of the gamut to creating a system with fewer accidents.

Dr. Ifeanyi who was reacting to questions at a panel discussion put to him by President Aviation Safety Round Table Initiative (ART), Dr. Gabriel Olowo who asked if the Quality Assurance Manager of the airline should be paid by the Nigerian Civil Aviation Authority (NCAA) so he can adequately monitor the airline for the regulator.

Ifeanyi said,” Quality Management must be an independent system that can report directly to the CEO and the CEO should also be part of that quality assurance system. Why will he report to the CEO, because maybe director of operations, maintenance they don’t want any kind of interference and then it expends on the culture in that organization. What the CAA does is to audit what the quality assurance system has already audited that is what our job is supposed to be because he or she is the eye of the CAA within that organization.

Any CEO that would not allow his or her own personnel within the quality assurance system to do his work, believe me that person is heading towards catastrophe, he may be picking on little gains that he believes are there when he forces the person to do what is not right, that has an effect.

“These management systems are supposed to be independent. This is my personal opinion, if I continually see CEO running around the NCAA looking for approval then something is wrong in his organization, that is a fact because of you are allowing your personnel to do what they need to do then you shouldn’t be doing it.”

Chipping in on the conversation earlier, the representative of Airline Operators of Nigeria (AON), Captain Akin George posited that the efficacy of the quality assurance manager depends on the system run by the organization which may make or mar it so to speak.

“ You are right to say the quality assurance manager knows where his bread is buttered but if he knows that come rain, come shine he knows will get what is due to him, that he is respected in the role he plays within the organization, then that works.

“However like you said we need to go the next step of the regulator who has oversight of the organization, the question we now ask is that job being done? How often does the regulator come to see what is being done with the operator? I know things have improved”