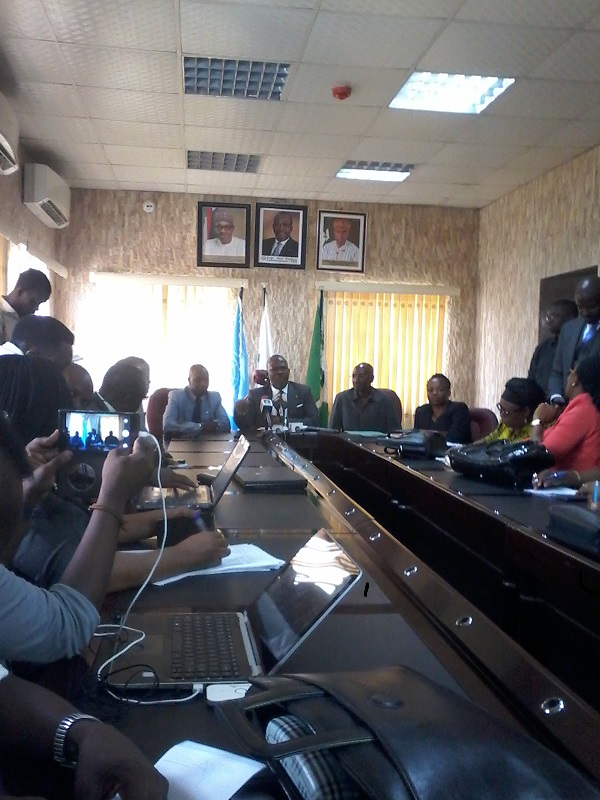 The Accident Investigation Bureau (AIB), on Monday, released the final report of the Dana crash of June 3, 2012, which killed 153 persons in Iju-Ishaga, Lagos, indicting the pilots for not taking proactive action when the aircraft first engine packed up during the first 17 minutes into the flight.

Reading the report at the AIB safety house at Lagos airport at a press conference, Engr. Akin Olateru, commissioner, AIB, said part of the causal factor was also that the crew failed to land at the nearest airport when the engine developed fault, adding that inappropriate decision making, and poor airmanship were part of the probable cause.

Olateru, who also announced the release of final reports of OAS crash in Osun State in 2011,     Serious Incident involving Bristow    Helicopters in Lagos in 2013 and that of Serious   Incident involving Presidential Implementation       Committee  on Maritime Safety and Security (PICOMSS) in 2012, said AIB published a preliminary report of Dana crash on 5th September, 2012, adding that four interim statements have been published.

He said four Interim Safety Recommendations were made and have been implemented by the Operator and the Regulatory Authority, which is the Nigerian Civil Aviation Authority (NCAA).

According to him, ‘the investigation identified the following:

published on 5th September 2012 were four in numbers wherein 3 was targeted to Dana Airlines and all were accepted and closed.

He said one was to NCAA, accepted and closed.

“There were four Safety Recommendations made in the published reports; One of which is to Federal Aviation Administration of the United States of America (FAA) targeting Pratt & Whitney the engine manufacturer; One to Dana Airlines; One to NCAA (with 3 safety recommendations in one); and One to the Nigerian Airspace Management Agency (NAMA) on Quality Assurance Management”, he added.

Meanwhile, Dana Air management has reassured guests of its total commitment to safety and comfort onboard its flights.

In a statement, the airline said: “We wish to also state that Dana Air swung into action immediately the Interim Safety Recommendations were released in 2013 and as an airline strictly committed to the safety and comfort of its guests, we  implemented all the recommendations same year, as released by  AIB. we also successfully passed an operational audit conducted by the Nigerian Civil Aviation Authority’s Flight Safety Group and its foreign partners”, the airline said.

It added that Dana Air was admitted into the IOSA register to underscore its strict adherence to global management and safety standards and procedures required of global carriers.

“While we acknowledge the full report, and will continue to review it, we are glad that the report confirmed that the aircraft was airworthy at the time of departure, flight crew were certified and that we have cleared all defects during their last check.

“Dana Air maintains a rich spare parts store to date and we have doubled our maintenance and safety efforts with constant training and retraining of our crew and ground staff.  The safety and comfort of our guests remains a top priority to us and may the beautiful souls of the crew and guests we lost at the unfortunate accident continue to rest in peace- Amen.  They remain forever in our hearts and our prayers and thoughts will continue to be with their friends and loved ones”, Dana air added.

Speaking on the Report  on  the Accident    involving   OAS     Helicopters, Olateru said the investigators identified ‘the non-adherence of the Pilot to Visual Flight Rules of clear-of cloud and obstacles while maintaining ground contact at all times led to Controlled Flight into Terrain (CFIT), as a causal factor, adding that ‘the Pilot was not Instrument Rated and lacked route familiarisation’.

“Five safety recommendations have been made. The Safety Recommendations made in the published report were 5, three of which were targeted at NCAA; One to NAMA and One to Nigerian Police Force”, he said.

On the report on the Serious incident      involving Bristow Helicopters’ Sikorsky    S-92 in 2013 at MMA, investigation, he said identified 115v cable loom chafed and arced with hydraulic pipeline, puncturing it and causing a high pressure leak which ignited on contact with hot surface of the Right Hand heat exchanger, resulting in fire on the Upper Deck.

He said contributory factors include ‘the effectivity of the aircraft was excluded in the Alert Service Bulletin ASB No. 92-20-002A issued by the manufacturer and that the Technical Directive TD-S92A-29-99 did not include Check/Inspection of the right hand side of the Upper Deck.

“Subject: Inspect LH and RH MGB, and Upper Deck Heat Exchanger Area, All 1, 2, and 3 system Hydraulic lines, Clamping all Components, and wiring Looms for any damage, chafing, or wear.

Speaking on the Report  on  the Serious Incident      involving Presidential    Implementation Committee on Maritime     Safety   and Security (PICOMSS), the Commissioner said investigation identified ‘the decision of the crew to continue the glide approach despite repeated landing gear warnings with the power lever below 25% rather than initiating a Go-around’, as the causal factor.

Contributory factors, he said include the failure of the crew to recognize the landing gear warnings.

According to Olateru, ‘here were two Safety Recommendations made in the published report; one to NCAA and the other was targeted to the Nigerian Police Force.

He said before compiling the final reports, they were sent out for 60 days as prescribed, for stakeholders’ comments and inputs.

While calling for a special fund for the AIB, Olateru lamented that while millions of dollars are spent on accident investigation in some country, less than N16 million has been proposed for same in the budget in Nigeria.

According to him, AIB budget is less than N2 billion, adding it has also spent over $6 million on the laboratory in Abuja.

“Our statutory   obligation   is   to   investigate air accident and      serious incident: and     by   our safety       recommendations, mitigate  them in order to forestall       reoccurrence.