IATA, NCAA to collaborate on implementation of Abuja Declaration on safety 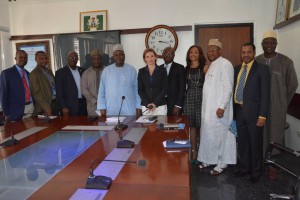 In a move to further improve air transport safety in Africa, the International Air Transport Association (IATA) and Nigeria, have pledged to collaborate closely in developing and rolling out a set of measures intended to enhance the African Union’s 2012 Abuja Declaration on Aviation Safety in Africa.

In a statement jointly signed by Sam Adurogboye, general manager, public relations, NCAA and Samson Fatokun, Area manager, South West Africa, IATA, Captain Muhtar Usman, Director General of the Nigeria Civil Aviation Authority, described this endorsement of the Abuja Declaration as ”one of the most significant steps taken to boost aviation safety and development on the African continent”.

“Nigeria is committed to supporting its implementation across the sub-Saharan Africa through developing new strategies that will see the recent gains on Africa’s safety record sustained and even improved,” he added.

Since the Abuja Declaration’s adoption in 2012, Africa’s safety performance has improved significantly.  Notwithstanding these important and valuable gains, when measured proportionally, the continent continues to have the world’s highest hull-loss rate per million flights.

“African safety is moving in the right direction thanks to the work done by a number of African nations including Nigeria who have worked hard to raise awareness of the importance of implementing the Abuja Declaration,” remarked Tanja Grobotek, IATA’s Regional Director, Safety and Flight Operations, Africa and Middle East.

“In 2015, we saw safety on the continent improve compared to the five-year accident rate for both jet and turboprop hull losses. Nevertheless, the challenges of bringing Africa in line with global performance remain,” she explained.

Grobotek said “IATA remains focused on its commitment to actively contribute its expertise and resources to help African Nations implement the standards outlined in the Abuja Declaration. One such area is the IATA Operational Safety Audit (IOSA), a proven tool for raising safety. IATA has worked with a number of airlines in Africa to bring them onto the IOSA registry. Eleven have joined since the Abuja Declaration was signed, which means 31 airlines from sub-Saharan Africa now benefit from this rigorous safety audit.”

Also discussed at the meeting was the need for African Governments to accelerate the implementation of ICAO’s safety-related standards and recommended practices (SARPS), according to the Universal Safety Oversight Audit Program (USOAP).