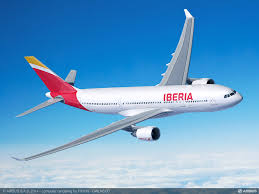 Spanish Airline, Iberia Plc, said it will from May 12, 2016, halt flight operations into and out of Nigeria due to low passenger traffic it has been recording in the past few months.

The airline in a letter dated April 19  with title: Re: suspension of operations, to its trade partners and signed by Kola Olayinka, its Regional commercial manager, West Africa, the company told the trade partners that the decision, though, was hard to take, it could no longer continue on the route due to low patronage.

“This is to notify you that our Spanish Airline, Iberia Plc will be suspending services into and out of Nigeria effective 12 May, 2016. This is a very tough decision that has been taken by our head office in view of the wide acceptance we have received from our passengers especially those heading towards Spain and Latin America over the years”, the letter reads in part.

The airline explained that its commitment to Nigeria since it started operations in 2014 has never been in doubt, but it had to take this decision ‘due to difficult and exceptional circumstances’.

“Iberia’s commitment to Nigeria since we started operations in 2014 has never been in doubt but over the last few months, we have witnessed dwindling passenger figures to Madrid, our main hub and our business has faced very difficult and exceptional circumstances, which has brought about this very difficult decision.

“I thank you for your support and assistance in promoting our airline in Nigeria over the last few years, you have truly been a partner and I hope you will understand the decision taken by Iberia in these very difficult times”, Olayinka said in the letter.

Although, Virgin Atlantic has not stopped flights into Nigeria as it has sacked all Nigerian crew out from the route, this is the second foreign airline in about one year that will be citing difficult times as reason for either restructuring or stopping operations.

Commenting on the development, John Ojikutu, a former airport commandant noted that the economic downturn, especially as it affect Nigeria will surely tell on the operations of the airlines, not only foreign.

He said as long as even bigger airlines, are not breaking even at this time, smaller ones like Iberia will definitely have problems.

“The economic situation in the country began to show shortly after the elections because many people left due to uncertainties. The smaller airlines like Iberia may be affected badly while the bigger ones will only want to cushion the effect with their First class and Business class fares which is gone up to over N1 million.

“Even the domestic airlines are not left out. Government needs to give then concession while flying into grade B airports (Akure, Ibadan, etc) in Nigeria while the multiple landings should be stopped but there should be no bail out”, he said.

Only recently, the foreign airlines threaten to reduce their workforce in Nigeria due to the fact that their operations are being adversely affected by Central Bank of Nigeria (CBN) policy on dollar.

They complained that they do not have access to enough dollar even when their operations and transactions are dollar based.

Between 2010 and early 2011, the British Airways (BA) and Iberia merged, after BA shareholders approved a £5bn merger between their airline and Spanish carrier Iberia.

The merger eventually resulted in the creation of a new parent company for the two carriers, known as International Airlines Group (IAG).

Together, they have 408 aircraft carrying around 57 million passengers a year.

The two carriers have more than 57,000 staff and fly to more than 250 destinations.