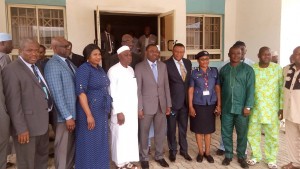 The president of International Civil Aviation Organisation (ICAO),  Dr. Olumuyiwa Bernard Aliu, has called on aviation agencies  to imbibe the culture of human capacity building in order to meet technological demands in the sector.
Speaking while addressing union members from Air Transport Services Senior Staff Association of Nigeria and National Union of Air Transport Employees and heads of aviation parastatals in Abuja,  Aliu said there was need for constant training as technology was developing.
According to him, all the facilities and navigational aids and other technologies would be useless without a trained workforce.
” Training, training, training  is the word in aviation and new technology must be handled by trained personnel in order to remain in business”, he said.
The ICAO President explained that with double traffic projection in Passenger and aircraft movements by 2030 globally, there was need to strengthen security and safety across the globe adding that the industry must be ready for the growth.
Aliu warned that doubling of traffic and passengers movement should not result into doubling of accidents.
He assured Nigerians that the country’s aviation will not be left behind adding that every open items will be closed for better results.
He commended the unions for the industrial harmony existing between them and management of parastatals saying it will foster development of the industry.
Earlier, the president of Air Transport Services Senior Staff Association of Nigeria ATSSSAN, Comrade Benjamin Okewu said it was pride and honour to have a Nigerian as the president of ICAO.
Okewu explained that with Dr Aliu’s position, that Nigeria has been rightly placed in the World map saying he has been collaborating with them at the International Transport Federation ITF.
Okewu expressed optimism that Nigeria will scale through at the just concluded ICAO audit adding that Nigeria though not occupying it’s rightful position, but will soon attain it’s position.
The general secretary of the National Union of Air Transport Employees NUATE, Comrade Olayinka Abioye on his part, said aviation family in Nigeria will support the second bid of Dr Aliu as ICAO President.
Abioye noted that since he became the ICAO President, that there have been significant changes in the sector especially with the review of various acts setting up agenciies.
By: Sade Williams
2016-03-31
Sade Williams