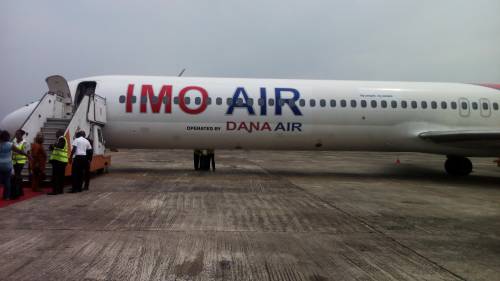 Imo Air operated by Dana Air, has commenced recruitment of indigenes of the state to occupy various positions in the airline as promised by Governor Rochas Okorocha, during the launch of the airline in January 2017.

During the interview which commenced in the first week of February, over 400 Imo indigenes participated in the process even as the airline prepares to hit the ground running with a number of initiatives to better impact the indigenes of the state and the South East at large.

According to the Accountable Manager of Imo Air operated by Dana Air, Mr Obi Mbanzuo ‘we have commenced recruitment of Imo state indigenes to occupy various positions in the airline and the process will be in batches.

“We intend keeping to the promise of the Governor and at the same time; we are trying not to over bloat our workforce.  As you may be aware, Dana Air was selected to manage Imo Air as a result of our consistency, on-time performance, world-class in-flight service, and shrewd managerial style and we intend sticking to this style just so we can match-up to the operational challenges in the industry.’’

“Definitely, all qualified candidates will be absorbed and as an airline committed to giving back to the society; we are already looking at other areas to impact and contribute our quota to increasing the traffic into Imo state, to make the state an investment and tourism hub in the south east”, he said.

Governor Okorocha while reacting to the news of the recruitment said ‘the exercise is just a confirmation of the promises we made during the launch of Imo Air. I am happy about this, as people thought we were joking about this well thought-out idea.

”The truth is, we want people to visit Imo State for both business and pleasure and going into an airline business was just a perfect business decision, considering that Imo state is the fastest developing city in Nigeria at the moment. And as you know, tourism and aviation are a perfect combination, one cannot work without the other.”

“We are also monitoring the progress of work at the Cargo International Airport and hopefully in April or May, we will receive the first Cargo plane in Imo State. Imolites should expect more Imo-centric initiatives and very soon, the 10% discount for Imo indigenes will also be unveiled.  We are still working out the modalities and we want to prove to the world that this administration walks the talk and doesn’t just pay lip service to projects.”

”Let me also mention here that, Dana Air the operator of Imo Air; is part of a massive conglomerate which spans Automobile, Aviation, Pharmaceutical, Steel, Plastics, Water, Chemical, Banking, and Real Estate. And the idea is to have them invest in various areas in Imo state, particularly in Agriculture. This is our plan as we believe creating a favorable business environment for local investors will bring forth foreign investments and investors’’

Dana Air having flown a record 4.5 million passengers in the last eight years of its operation, entered into an airline partnership with the Imo State Government to boost tourism, business activities and employment opportunities in the state.