The federal government has directed that all critical stakeholders in the implementation of the aviation development roadmap must be involved in all the processes leading to the actualisation and realization of its goals.

Minister of State for Aviation, Senator Hadi Sirika who gave the directive while presiding over the inaugural meeting of the Project Steering Committee of the Aviation Road Map in Abuja, said it is the only way to ensure the transparency and confidence in the process.

The minister said the Project Steering Committee and Project Delivery Team (PDT), made up of representatives of the Infrastructure Concession and Regulatory commission, Federal Ministries of Transportation, Finance, Budget and National Planning, relevant Aviation Agencies, key Labour Unions in Aviation Sector, was constituted to fast track the implementation of the Aviation Road Map, as approved by the Federal Executive Council.

The Terms of Reference of the Steering Committee according to the Honourable Minister include overall policy determination and decisions, approving of all programmes, projects and financial proposals relating to PPP/Concession on the recommendation of the Delivery Committee, hold periodic (Quarterly) meetings to review Policy direction and steering the course of the PPP Projects on Aviation matters nationwide. 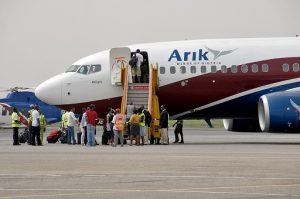 In a statement signed by James Odaudu, Deputy Director, Press & Public Affairs, the minister further stated that the Transaction Advisers whose appointments were earlier in the year confirmed by the government, have completed contract documentation and held kick-off meetings with the Project Delivery Team, and have also prepared their work programmes spanning the 9-month contract duration.

The deliverables of the Transaction Advisers according to the Honourable Minister  are to provide the policy and business context for PPP and identify Financial and Economic basis to establish the business case for adopting PPP methodology in the procurement of the projects, Develop a structured PPP procurement process through a three-phased bidding process to select a PPP partner (Prequalification, Request for proposal and selection of preferred bidder/partner and negotiation), and final negotiations with  preferred bidder, preparing the Full Business Case (FBC) and supporting Federal Ministry of Transportation to obtain FBC Compliance Certificate from ICRC, FEC approval and progress transaction up to financial close.

Speaking at the event, the Director General, Infrastructure Concession Regulatory Commission, Engr. Chidi Izuwah said the expected gains to be derived from the proposed concession of major aviation infrastructure in the country would be unprecedented.

According to him, Nigeria, though the biggest country in West Africa, was in competition with other nations within the sub-region and can therefore not afford to be left behind, given her desire to develop into a regional air transportation hub.
He said Concession and PPP were the ways to go, as even nations that were better economically endowed than Nigeria have continued to adopt the strategies in view of dwindling national resources.