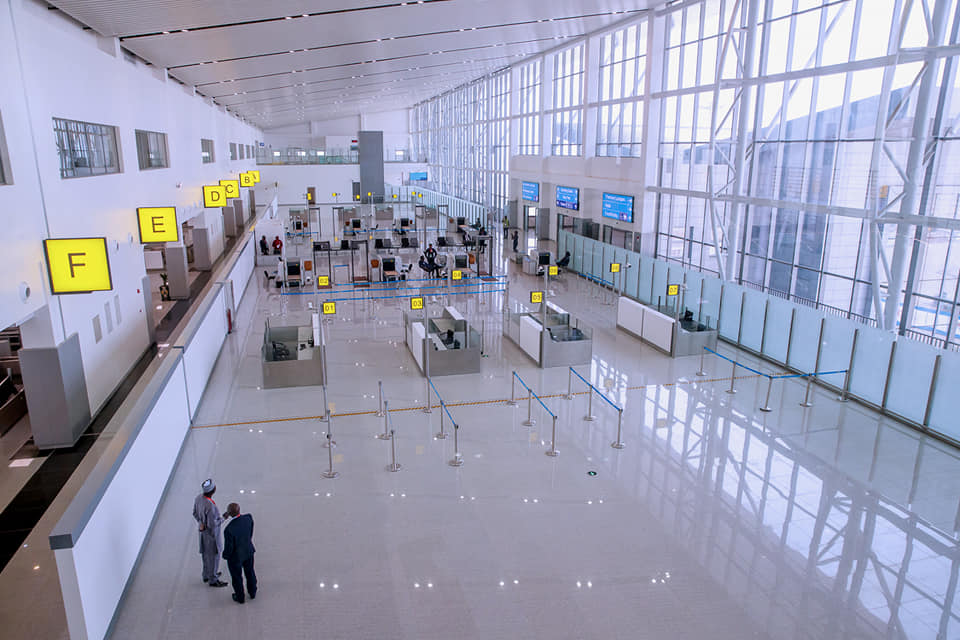 President Muhammadu Buhari, on Thursday commissioned the new international terminal of the Nnamdi Azikiwe International Airport (NAIA), Abuja that the Federal Government was committed to making Nigeria the headquarter of aviation in the West Africa sub region.

The unveiling of the new international terminal, which was funded by Chinese Exim Bank with counterpart funding from the Federal Government and constructed by China Civil Engineering Construction Corporation (CCECC), is coming within two months after a similar one was commissioned at Port Harcourt RT International Airport (PHIA) in October.

The President also assured Nigerians that the Federal Government was also committed to developing infrastructure in the aviation industry.

He commended CCECC for completing the project, adding that the completion further boost the infrastructure in the aviation industry.

Also speaking, the Minister of State for Aviation, Senator Hadi Sirika said that the Abuja terminal is not only strategic but that it is the second busiest airport in Nigeria.

He commended President Muhammadu Buhari for commissioning the project ,noting that it was the second project the President would commission within two months.

The Minister added that the terminal building is on a 56,000 square metres with a a 60m long skywalk that connects to the Airport Metro Station, adding that departing passengers arriving the Airport via Abuja Metro enter through Skywalk to the departure level on the second floor.

“It feels very great because this is one of those projects that has the capacity of connecting nations, cultures, business and frinds. This is what this project is for.

Speaking further, he said, “This is very easy because Nigeria is geographically located at the centre of Africa and that of the world. We are taking an advantage of that and we are investing heavily. This is one of the novel things that Mr. President is doing. He told us from the beginning to ensure we finish all abandoned projects, rather than creating new ones, start them and unable to finish them. Mr. President has been walking his talk and this is evident with the commissioning of this project today.”

On relocation of control tower and fire service, he said, “As soon as the counterpart funding is paid, the money is accessed from the China Exim Bank, we will relocate the fire service and also build another control tower to serve the entire airport and many other things that were not mentioned here today. We will put the facility to sue from day one and it will be restricted use. The other side of the terminal is very adequate for now for whatever e want to sue it for, but for the future, if you look at the terminal, it has an open space to accommodate other passengers.”

He said that the area covered by the roof is the size of five football pitches, 66 check –in counters, five baggage collection carousals, 28 Immigration desks at arrival and 16 Immigration desk at Departure.

On his part, a member of the Senate Committee on Aviation, Senator Ibn Na’Ala, who represented the Committee, said that the new international terminal is world class facility that could compete favourable with other airport terminals across the world.

He added the terminal being a world class infrastructure needs a second runway and that it is the desire of the National Assembly for Abuja to have a second runway.

He stated that NASS would work with the Federal Government to give Abuja Airport a second runway.