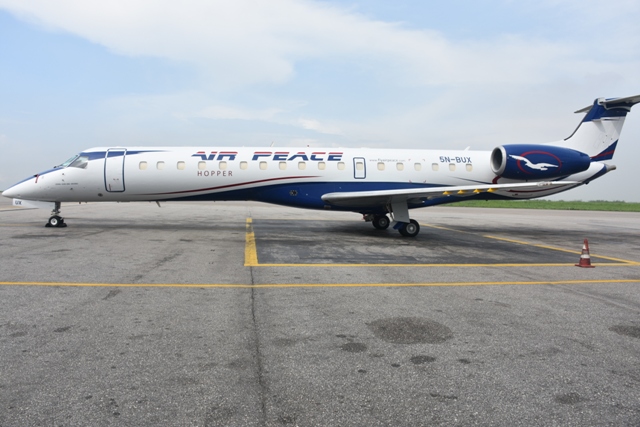 Air Peace has dismissed reports alleging that one of its aircraft almost crashed on the Lagos-Enugu route on Friday, describing the claims as an unfortunate misrepresentation of facts.

A statement issued by the airline’s Corporate Communications Manager, Mr. Chris Iwarah on Monday said the aircraft experienced a change in cabin pressure en-route to Enugu and its flight crew had to do the normal technical manoeuvre by descending to a level comfortable enough for passengers on board.

The carrier debunked insinuations that the aircraft involved in the incident might not have been properly maintained, explaining that the aircraft secured a renewal of its certificate of airworthiness (C of A) on December 10.

The aircraft, the airline added, also went for its mandatory comprehensive maintenance checks (C-checks) abroad and got its certificate of release to service (CRS) in September 2017. C-checks are normally done on aircraft every 18 months. At the end of the checks, a CRS is issued to confirm the maintenance done.

Air Peace insisted that its aircraft were not only maintained at some of the best facilities in the world, but also had a reputation for spending millions of dollars on each C-check exercise to ensure its aircraft were in top shape because of the premium it placed on the lives of its customers and crew.

The carrier said in line with its strict maintenance and safety standards, it had retained the services of BCT Aviation of the United Kingdom for its routine maintenance programme on ground its base in Lagos 24 hours of the day throughout the year.

The airline described change in cabin pressure as a common occurrence in aviation across the world, including Europe and America.

“On Friday, December 14, 2018, our Lagos-Enugu flight experienced a change in cabin pressure. Where there is a change in cabin pressure, the oxygen masks will automatically drop from the panel for use by passengers on board the aircraft. This exactly was what happened on Friday. During safety briefings, passengers are advised to pull on the mask to trigger the flow of oxygen. The flow of oxygen is expected to last about 12 minutes within which the flight crew would descend to a comfortable altitude (usually below 10000 feet above sea level). Change in cabin pressure is a common occurrence in aviation across the world, including the UK and America.

“Once there was a change in cabin pressure, the oxygen masks on the aircraft automatically deployed. And in line with standard safety procedure, our flight crew performed a technical manoeuvre by descending to a level comfortable enough for passengers on board. We, however, observed cases of some passengers who did not properly fit their oxygen masks. A few others, perhaps out of panic, pulled too hard on the oxygen masks, causing the equipment to snap. This led to the unfortunate claims that there was no flow of oxygen from the masks. For the avoidance of doubt, the oxygen generators are part of the items of interest during C-checks. So, it could not have been right that there was no flow of oxygen.

“While it is quite expected and understandable that passengers would panic on occurrence of incidents such as a change in cabin pressure, the claims of a near-crash were a regrettable misrepresentation of facts which really should not be. The aircraft was ferried from Enugu back to Lagos in less than an hour of safely landing at destination. Certainly, no crew would fly an aircraft that is not airworthy. The aircraft involved in the incident had its certificate of airworthiness renewed on Monday, December 10, 2018. The aircraft also went for its mandatory comprehensive maintenance checks (C-checks) abroad and got its certificate of release to service (CRS) in September 2017. C-checks are usually done on aircraft every 18 months. At the end of the checks, a CRS is issued as evidence of the maintenance done. In line with our strict maintenance and safety standards, we retain the services of BCT Aviation of the United Kingdom for our routine maintenance programme on ground our base in Lagos 24 hours of the day throughout the year.

“We sincerely regret the inconvenience caused our loyal customers as a result of the incident and wish to reassure them that we place huge premium on the lives of our esteemed guests and crew and will never do anything to put them in harm’s way. We have had four years of accident-free flight operations and we are very determined to sustain our reputation and record. We thank members of the public for their generous show of love and trust in us to continue to deliver exceptional, safe and comfortable flight services to them,” Air Peace said.