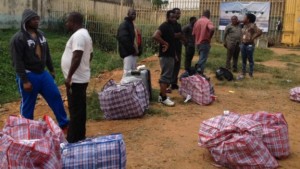 The deportees, comprising 166 males and six females,  arrived the hajj camp area of the Murtala Muhammed International Airport at about 7:00 a.m abroad a chartered aircraft.

They were received by various agencies such as Immigration, Police, National Agency for Protection and Trafficking in Persons, NAPTIP, and other relevant stakeholders.

As at the time of filing this report, the returnees had moved away from the Lagos Airport to their various destinations.

Ekpedeme King, Immigration spokesperson said that the deportees were returned to the country for overstaying their visas in Libya and other immigration offences in the North African country.

“What I can tell you is that some Nigerians were deported today for immigration offences. Most of those brought overstayed Libya.

One of the deportees, who simply identified himself as Chris claimed that he travelled out of Nigeria about two years ago in search of greener pastures.

He however insisted that he didn’t commit any crime in Libya that would warrant his deportation back to Nigeria.

Last November, about 76 Nigerians were deported from three European countries including United Kingdom.