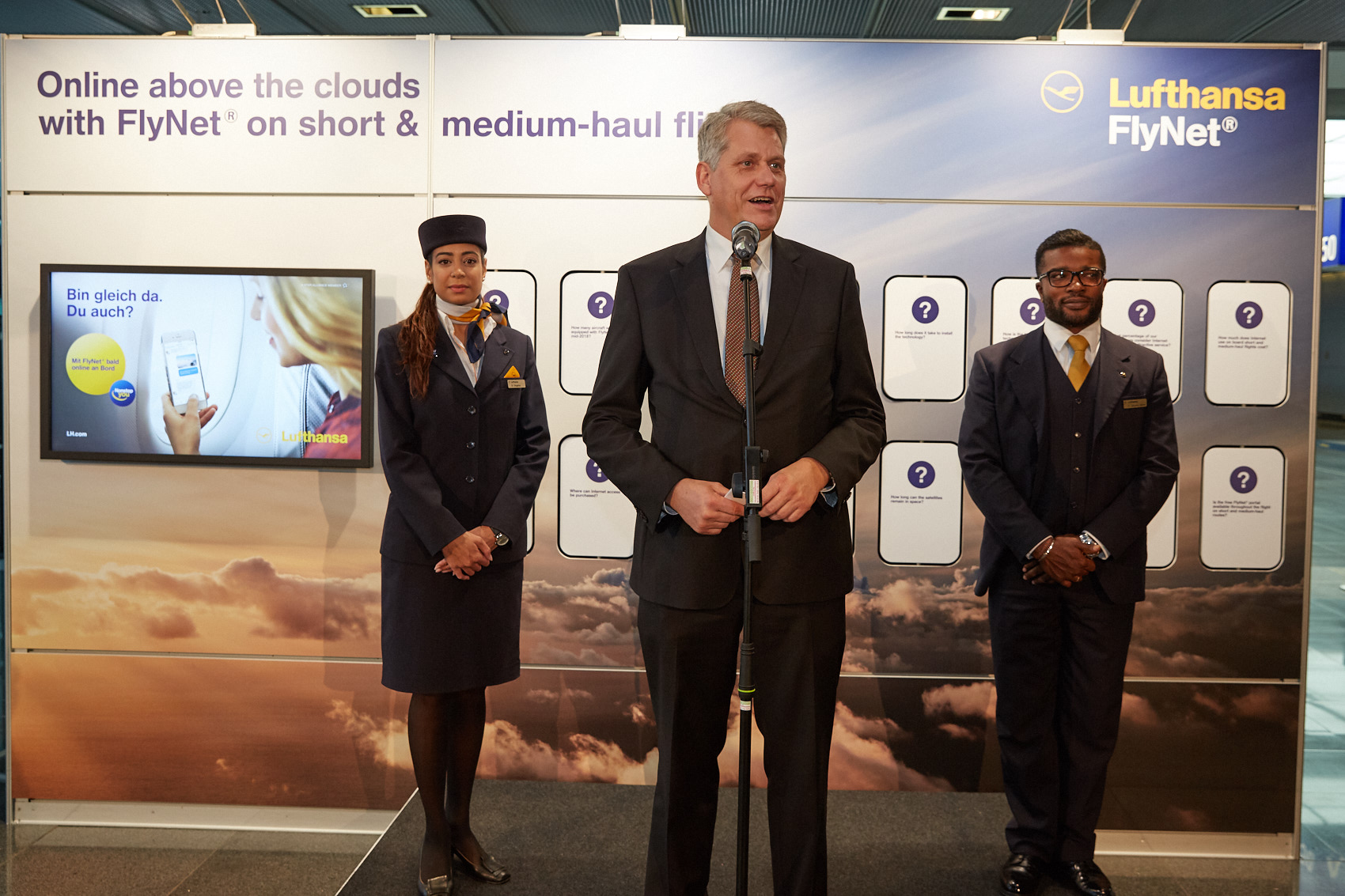 Harry Harry Hohmeister, member of the Board of Directors of Deutsche Lufthansa AG and responsible for Hub Management at the launching ceremony

While soaring over the Alps, passengers will soon have the opportunity of streaming videos, shop online and send emails above the clouds with broadband quality on short haul and mid-range flights.

With the technology, passengers of Lufthansa and Austrian Airlines will be able to go online on shorter journeys too – as they have already been able to do for some time on long haul flights like on the Nigerian routes.

“This great news means that passengers from Lagos, Abuja and Port Harcourt can connect seamlessly to the internet while traveling to any destination in Europe, Middle East and Northern Africa”, says Mr. Robin Sohdi,  Lufthansa country manager in Nigeria.

Last summer, Lufthansa received the so-called Supplemental Type Certificate for the Airbus fleet A320 from the European Aviation Safety Agency (EASA), and successfully concluded all the necessary preparation work. Now the next stage of testing on Lufthansa and Austrian routes will start, initially involving five aircraft in each case. Passengers who fly on these aircraft will be offered free Internet use during this test phase. The analysis of the user behaviour will provide the data necessary to further enhance the service ahead of its market launch.

Harry Hohmeister, member of the Board of Directors of Deutsche Lufthansa AG and responsible for Hub Management, said:  “I am pleased that we can soon offer broadband Internet to our passengers on inner-European flights, giving them the chance to have a seamless digital experience. Since the launch of Lufthansa Flynet, it has been our goal to offer added value on board to our customers through innovation – and that also includes our Internet provision”.

In the first quarter of 2017, the number of Lufthansa aircraft fitted out with Internet access will rise to around 20. One by one, the entire Lufthansa A320 fleet is to be equipped with the latest advanced technology by the middle of 2018. The re-fitting of all 31 aircraft at Austrian Airlines is planned to be completed before the end of April 2017.

As well as Lufthansa and Austrian Airlines, Eurowings also has plans to bring the Internet on board its aircraft – estimated launch is to be by the end of the first quarter 2017. A total of 69 Eurowings aircraft are to be fitted with the systems by the summer of 2017.

Lufthansa passengers can gain Wifi access to the Internet using their own mobile devices. As well as email services, applications such as video streaming will be possible too. Market launch of the new service is scheduled to take place sometime during the first quarter of the year. Customers will then be able to choose between three different service packages – FlyNet Message for EUR 3, FlyNet Surf for EUR 7 and FlyNet Stream for EUR 12 per flight. Whilst FlyNet Message only allows the use of messaging services such as email, WhatsApp or iMessage, FlyNet Surf also enables passengers to surf the Internet. With the FlyNet Stream service package, streaming is also possible. The packages can be paid for by credit card or via payment services such as Paypal.

Lufthansa Technik is responsible for the fitting of all the systems and components, as well as dealing with the required Aviation regulations and other statutory authorisations. They are fitting out the entire Airbus A320 family of the Lufthansa Group Airlines with the latest Ka-band satellite technology. By spring, almost 100 aircraft are scheduled to have been equipped. The aircraft can be fitted with the required antennae and routers on a series of ten production lines, working simultaneously, at the Lufthansa Technik sites.

On account of the only minimally-invasive adjustments needed to the aircraft structure, the rapid re-fitting of even large fleets is possible – generally involving just four days downtime per aircraft.

Lufthansa Systems is providing the necessary technical infrastructure for Internet connection on board. This includes the network operations in the aircraft – the technical pre-requisite for Wifi on board – as well as the provision of the necessary software for the operation of the FlyNet portal, through which the customer gains access to the net.

Within the framework of their global partnership, Lufthansa Systems and Lufthansa Technik are in addition providing a modern, multi-functional digital platform (BoardConnect) to enable digital use cases ranging from entertainment to ancillary revenues. Both Lufthansa Group Airlines and external customers will profit from this strong cooperation arrangement.

As long ago as 15 January, 2003, Lufthansa was the operator of the first commercial long haul flight worldwide to have broadband Internet access. The service had to be taken off the market in 2006 despite its technically reliable system and its growing popularity with passengers, because the necessary “Connexion by Boeing” satellites ceased operations. Since the end of 2010, Lufthansa has again been offering broadband Internet access on its inter-continental flights – once again as worldwide first.

And since June 2015, FlyNet has been available on all current 107 Lufthansa long haul aircraft, With the addition of the Boeing 777 to the fleet, the group’s subsidiary SWISS also started offering Internet on its long haul flights; for the short haul and mid-range, its introduction is currently also under consideration.