Unlimited surfing and streaming in the skies over Europe – from now on, will be the reality on many Lufthansa and Austrian Airlines aircraft.

This means a seamless Internet connectivity from the long haul flights like from Nigeria that have been equipped with this technology for a while now.

Internet access will also be available on Eurowings flights in a few weeks’ time.

Up to now, 19 Lufthansa A320 family fleet aircraft, as well 31 Austrian Airlines and 29 Eurowings aircraft have been fitted with the necessary Wifi technology and satellite antennae for this service. Additional ones are in the process of being equipped. This new high speed technology has been successfully tested in the past months on both Lufthansa and Austrian Airlines flights.

The internet access works simply via Wifi using the passengers’ own mobile devices. The offers range from messaging services through surfing the net and even to video streaming.

Customers can choose from one of three service packages. On Lufthansa flights, they comprise FlyNet Message for three euro FlyNet Surf for seven euro and FlyNet Stream for twelve euro per flight. 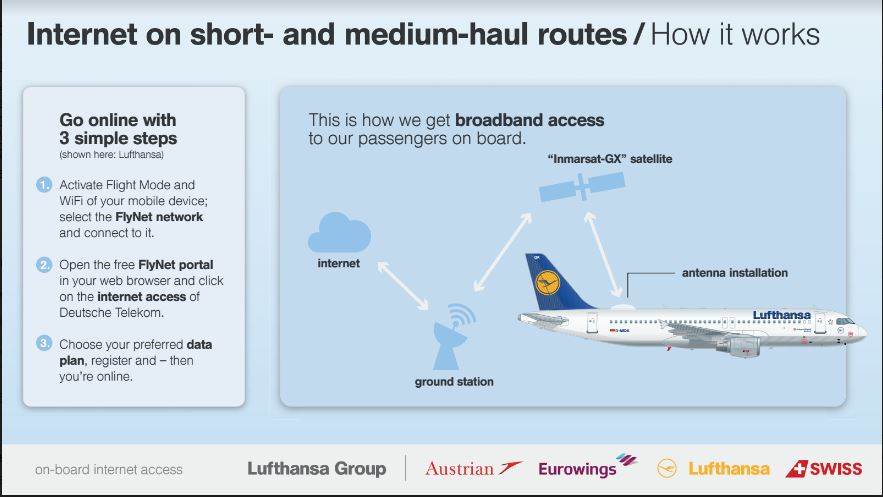 The internet provision of the Lufthansa Group airlines and their technology partner Inmarsat uses the most advanced broadband satellite technology (Ka-Band) and offers seamless and reliable coverage on short- and medium-haul flights¬ via the Inmarsat network Global Xpress (GX).

The internet service provider and partner of Inmarsat is Deutsche Telekom. Lufthansa Technik is responsible for fitting the systems and components, as well as dealing with the required aviation regulations and other statutory authorizations.

They are currently equipping the entire Airbus A320 family fleet of Lufthansa Group Airlines – Lufthansa, Austrian Airlines and Eurowings. Lufthansa Systems is providing the necessary technical infrastructure for internet connection on board. This includes the network¬ operation in the aircraft – the technical prerequisite for Wifi on board – as well as the provision of the required software for the operation of each airline’s respective internet portal, through which the passenger gains access to the net.

Lufthansa has always been a pioneer when it comes to digitalization on board. As early as on 15 January 2003, the airline offered the world’s first long-haul commercial flight with internet ¬access.

Despite its growing popularity among passengers, the technically reliable service had to be discontinued in 2006 because the satellite operator “Connexion by Boeing” ceased commercial operations.