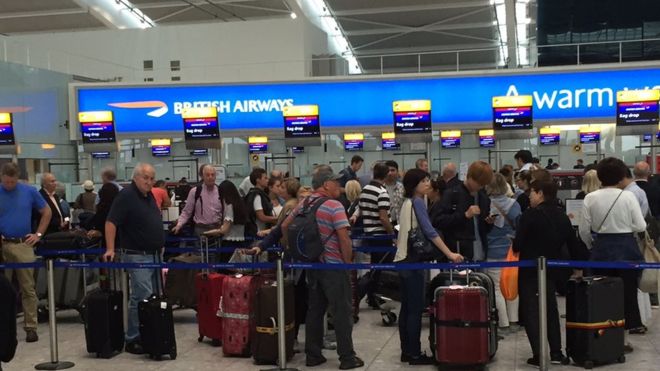 British Airways has cancelled all flights from Heathrow and Gatwick on Saturday, including flights into and  from Lagos and Abuja, due to a major IT failure that is causing very severe disruption to its global operations.

In Lagos, Mr. Kola Olayinka, British Airways  country commercial manager, West Africa, told The Travel Port correspondent on phone that ‘the airline staff is working on the system to restore normal operations as soon as possible.

“What has happened is that there is an IT glitch that has necessitated the cancellation of our flights from UK, in fact there is no flight out of Lagos tonight but let’s see what happens overnight, experts are working on it in a bid  to return to normalcy”, Olayinka said.

According to the UK Guardian, the airline said that its terminals at Heathrow and Gatwick had become “extremely congested” due to the computer problems. It decided to cancel all flights from both airports before 6pm UK time on Saturday. “Please do not come to the airports,” BA said.

A later statement said the airline had been forced to cancel all remaining flights scheduled to depart from the UK’s largest two airports on Saturday.

More than 1,000 flights have been affected. At Heathrow alone, BA had 406 flights scheduled to depart after 9am and a further 71 at Gatwick, according to flightstats.com on Saturday.

“Following the major IT system failure experienced earlier today, with regret we have had to cancel all flights leaving from Heathrow and Gatwick for the rest of Saturday,” a spokeswoman said.

“We are working hard to get our customers who were due to fly today on to the next available flights over the course of the rest of the weekend. Those unable to fly will be offered a full refund. The system outage has also affected our call centres and our website but we will update customers as soon as we are able to.”

The airline said delays and disruption could continue into Sunday, adding that “most long-haul flights due to land in London tomorrow are expected to arrive as usual”.

The IT failure has struck on one of the busiest travelling days of the year in the UK, coinciding with the start of a bank holiday weekend and the half-term break for some schools.