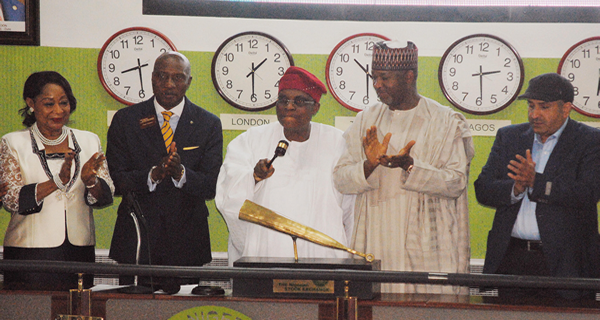 Med-View Airline PlC was yesterday listed in the Nigerian Capital Market as one of the publicly quoted companies registered with the Nigerian Stock Exchange(NSE), adding N14.65bn into market capitalization.

Med-View is one of the domestic airlines in the country flying into 14 local, regional and international destinations.

With a turnover of N3.6bn at the initial stages of operations, its turnover has grown to N26bn with a projected growth of N 76bn in the next five years.

Med-View Airline listed 9.75 billion ordinary shares of 50 kobo each at N1.50 per share.

Chief Executive Officer of the NSE, Mr. Oscar Onyema said the introduction of Med-View Share in the Nigerian bourse has further deepened the market.

According to him, in spite of the global economic challenge, the air transport sector in Africa remains viable. He encouraged other companies in the aviation value chain to emulate what he called the bold step taken by Med-View.

He said the air transport industry continues to contribute about USD$10bn to Gross Domestic Product (GDP) of African countries and it is projected that close to 6m jobs would be supported by African Air Transport sector over the next 20 years.

Onyema said, “We went through rigorous process to determine that Med-View Airline meets the listing standards of the Nigerian Stock Exchange. With this listing the company is showing its commitment to a culture of strong corporate governance, excellence, professionalism and efficient services to its passengers as well as providing increasing and increased returns to its shareholders.”

Managing Director/CEO of the airline, Alhaji Muneer Bankole who earlier performed the symbolic closing gong ceremony at the floor of the exchange said the airline’s foray into regional and international operations as well as its flagship hajj services contributed to its growing financial base.

Operating with two lease aircraft at inception, the airline now has four aircraft and two lease planes in its fleet.

He disclosed that the airline would soon expand its routes to the United State, Dubai, Lisbon, among others in the nearest future.

He called on investors within and outside Nigeria to invest in the growing company assuring them of safety of their investments.

Bankole added that the airline is listing on the Nigerian bourse to enhance the corporate value and brand image of the airline as well as enabling it to have better access to long term capital from a wide range of local and international investors.