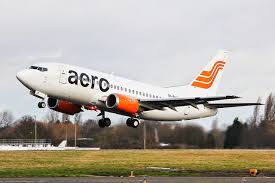 Aero management has said safety remains its utmost priority and will not compromise it for any reason.

Explaining the incident of the misty cabin which occurred on an Aero flight NG316 on Wednesday, Captain Ado Sanusi, managing director of the company in a statement said the incident in regretful, adding that investigation into it is ongoing.

According to him, ‘Aero flight NG316 on April 18, 2017, departed Port-Harcourt airport in Rivers State after it was cleared for departure at exactly 1608GMT, enroute Lagos, with 52 adults and one infant on board.

“At 1645 GMT about 75NM to Lagos and cruising at 24,00ft, the cabin crew observed that the cabin was misty. This was reported to the Captain, who promptly announced to passengers accordingly but with firm assurances of safe landing in Lagos.

“Minutes after that announcement, normal descent was initiated into Lagos, while descending, a passenger went into the lavatory, after which the lavatory smoke detector alarm came on. The cabin crew again reported this development to the Captain the smoke got denser in the cabin”, he said.

He explained that ‘the crew had “Aft Cargo Smoke” indication in the flight deck, adding that they carried out the smoke dispersal procedures.

He said they also contacted the air traffic control at exactly 1655GMT, requesting for emergency support services and proceeded to Lagos, which is the airport with the full complement of emergency support.

“The cabin crew kept reassuring the passengers of their safety and also handed out wet towels to them as a precautionary measure. Aside from that, the Captain also announced to the passengers to be calm since the smoke in question did not present any irritation or discomfort.

“The aircraft landed safely at 1703 GMT without any incident and the company engineers swung into action with the systems checks, and reported all normal. Even though the incident has been reported to the authorities and preliminary reports suspecting that the smoke was from the baggage compartment, investigation into the incident is ongoing.

“We are known for our commitment to safety and professionalism in the industry, which we cannot compromise for anything and therefore sincerely regret any inconveniences this might have caused our esteemed passengers”, he added.