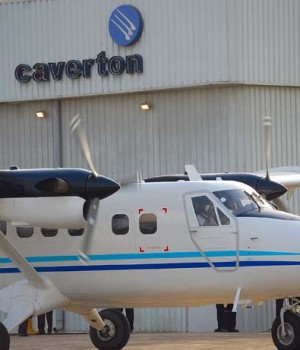 The Nationa Association of Aircraft Pilots and Engineers (NAAPE), on Wednesday morning, shut down the operations of Caverton helicopters in Warrior, Port-Harcourt and Lagos over alleged labour issues ranging from alleged disparity in salaries pament for Nigerian and expatriates workers in the company, high handedness and insensitivity to workers’ plight.

The action followed a warnng strike notice issued by the union and signed by its general secretary, Ocheme Aba.

It was learnt that the union had as early as 4 am, shut down the operations asfiscussions over the issues had not yielded fruits, even as the clampdown started place before the airline could embark on their first flight. .

It was also gathered that four workers were sacked from the airline arbitrarily, all of whom have spent nine years at least but were sacked with an entitlement of N50, 000 in violation of their terms of service.

In the statement, Aba noted that  ‘it has become clear that the management of the Caverton Helicopters has taken NAAPE and its members for granted. Despite concerted efforts on our part to secure amelioration to several labour issues severing our relationship, management has remained unconcerned about these issues:
“Refusal to commit to payment of salaries every month on, or before 26th day of the month as per Condition of Service as against the present situation where salaries run into months in arrears.
“Refusal to commit to payment of salaries to all Pilots and Engineers in Caverton at the same time, irrespective of nationality, as against the present situation where expatriates are paid promptly but Nationals are owed for months.
“Refusal to commit to pay remunerations being converted from Dollars to Naira at prevailing inter-bank rate as previously agreed.
There is obnoxious issue of deduction of tax and pension without remitting same to appropriate authorities.”, he said.
NAAPE said that having exhausted all avenues of seeking redress without success, they have to come to the painful conclusion that the management of Caverton has taken their goodwill and patience for granted.

The union however asked its members, including pilots and engineers, nationwide to cooperate with it as it started the warning strike by midnight.