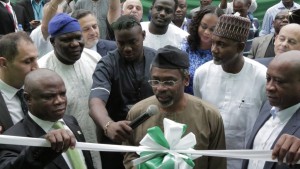 Naija Lottery, the trade name of the International Lottery Gaming Limited (ILGL) in Nigeria having been granted a 10-year duration grade A national license by the National Lottery Regulatory Commission (NLRC), has commenced operations in Lagos and other states across the country.

The company said Naija Lottery is offering two games: the popular 5/90 with 5 daily draws and the newly introduced instant game 1/36 which will offer additional excitement to Nigerian players and will begin operations with 1500 Points of Sales which will increase to 10,000 within one year.

At the official launch ceremony of Naija Lottery operation in the company headquarters in Lagos, Director General of the Nigeria Lottery Regulatory Commission (NLRC), Mr. Adolphus Joe Ekpe, said lottery has the potential to increase government revenue and create wealth and employment for Nigerians in the face of dwindling oil revenue.

While commending Naija Lottery for the feat attained in its know-how of Lottery, Betting, Racing & Video Lottery operations and its leading-edge technology, Mr. Ekpe said “This project will create employment for Nigeria because lottery creates employment. Those who would market the ticket, they work for the company. Now secondly it would create income because those who play stand the chance of winning.

“It would create income for the government. Government has to derive revenue from it because statutorily 20 per cent of the proceeds of lottery have to be remitted to the National Lottery Trust Fund and it has to be used for good courses. These are projects that touch the lives of ordinary people; it could be a road, hospital or may be supporting sports equipment and many things that affect the lives of ordinary people”, he said.

He explained that the proceeds of lottery create income for the government and for the individuals. At the same time the company generates income.

“ So 50 per cent by our Act is for prizes, 20 per cent as government proceed and 30 per cent goes to the operator.

According to him, “Apart from the fact that  it reduces crime because when people are gainfully employed, you tend to run away from crimes. It will form another way of diversifying our economy because we are now depending solely on oil and the oil price is going down. Lotteries are another way of diversifying economy and remember that lottery depends on human being and we have high human population. Therefore this is one of the sectors that should be encouraged.”

Ekpe urge the company to play by the rules in a  way so that the money that is due to government would be given to government saying it has to be played in a way that somebody does not even need to come here to participate. It has to be an online something; it has to be automated such that people can play from all parts of the country.

He said Naija Lottery met all the requirements for the commission to give it operating licence saying they were given a license last year and now they are starting their operation. So they are complying. The only thing that is remaining for them to do is to enable us, as a commission, see what they are doing on daily basis.

The Lottery Commission DG said attempts by states to licence Lottery Companies before they start operations in the states amounts to duplication as most state governments especially Lagos state says if you have a license even at the federal level, you still need to have a license here. He urged the national assembly to enact laws protecting operators from unfair harassment by states.

He said “It is duplication. If you pay to the Federal Government, you still need to pay here. The National Assembly has to come up with a resolution that would create harmony between the states and the federal Government. Secondly, they should amend the act.

Majority Leader of the House of Representatives, Mr. Femi Gbajabiamila said there is going to be harmony as the lawmakers will come up with laws to protect lottery operators in the country and declared that state can’t just encroach on federal jurisdiction.

“We would do whatever need to be done legally. There has to be a proper legal framework. Any state cannot encroach to federal jurisdiction. We need to make sure the commercial value of it does not suffer as a result of conflict between the states and the federal governments.”

Gbjabiamila later cut the ribbon in the presence of the Chairman of International Lottery & Gaming Limited Prince Adesegun Oniru and expressed his certainty that Naija Lottery will prove to be a most successful operation while the NLRC DG also pushed the button on the ceremonial draw and wished good luck and prosperity to Naija Lottery personnel and players.

The company Vice Chairman Mr. Ronaldo Minaise reiterated that Naija Lottery is committed to excellence, responsible gaming and players’ satisfaction saying it focuses on responsible gaming, protecting the minors, increasing player satisfaction, contributing to the good causes of the State and the Nation safeguarding players’ interests.

The draws of the games will be transmitted on Youtube on Niaja Lottery channel and the website www.naijalottery.com.

Stakeholders commended the feat of the company especially as Naija Lottery adopts the green and white colour of Nigeria which it said represent the greatness of our nation and our faith to a better future.

Technology for the games will be provided by INTRALOT which supports the lottery operations of ILGL with innovative lottery system, entertaining numerical games and exciting content delivered to players through a well-balanced Points of Sales network.

Its broad portfolio of products & services, its know-how of Lottery, Betting, Racing & Video Lottery operations and its leading-edge technology, give INTRALOT a competitive advantage, which contributes directly to customers’ efficiency, profitability and growth.

It has it presence in 57 jurisdictions and about 5400 people and revenue of €1. 85 billion for 2014, INTRALOT has established its presence on all 5 continents.