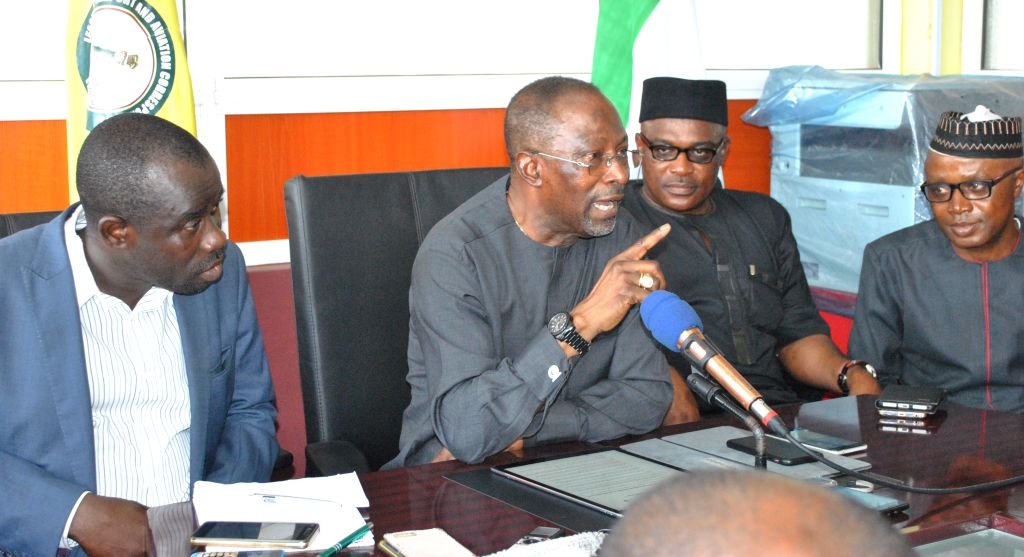 The Nigerian Airspace Management Agency (NAMA) was the highest contributor in safety terms, to an accident free year in 2017, Captain Fola Akinkuotu, managing director of the Agency has said.

Fielding questions from aviation journalists at the Gateway Forum organised by the League of Airport and Aviation Correspondents (LAAC) in Lagos, he said even-though its (NAMA’s) works are not often seen physically by passengers and other aviation services consumers, without the Agency’s timely provision of equipment, aviation is nothing.

“The zero accident in 2017 was a global achievement and it touched us here in Nigeria and we should all be happy for it. There is no passenger that leaves his house and want to travel by air and his thoughts will not be that he will land safely.

“And we must strive to maintain it because the accidents we have had in the past have helped us to look at the issues, meet the challenges and act. That does not mean we should let down our guards and be complacent.

“But without NAMA, I tell you aviation will not be what it is today. Going back maybe 20, 30 years ago, if you wanted to land at the domestic terminal may be as pilots, you must you know that as you come from Iju where the Very High Frequency VHF omni directional radio range (VOR) is located, at seven nautical miles from the airport, close to the airport, you cross Agege Motor road, every pilot knows Agege motor road and as you cross it, there is a Catholic church on the right which has green roof, once you saw those things, you knew you were in the neighbourhood.

“We are focused and who provides that guardian system? It is NAMA. Without Air Traffic Control we would be running into each other, who provides the control? Who is responsible? NAMA. So the contributions of NAMA towards an accident-free year are enormous, not often seen, sometimes not even very much appreciated but we are doing that which is our role and I think we are doing well. We are doing well, we are making great effort to ensure that we improve on it”, he said.

Akinkuotu, who revealed plans to embark on aggressive deployment of communication, navigation and surveillance (CNS) infrastructure in the next one year to further boost the safety of air travel in the country, said the agency has put in place arrangements for the installation of Category 3A Instrument Landing Systems (ILS) at the Lagos and Abuja Airports.

He said the deployment of the above hi-tech navigational equipment would ensure that aircraft land can land in zero-zero visibility given the adverse weather at certain times within the year.

The NAMA boss, who recently clocked one year in the saddle, listed some of his achievements to include installation of communication radios in strategic areas in the country as well as upgrade of existing ones, deployment of ILS and other navigational aids across the country.

He also revealed that a brand new ILS and a Doppler Very High Frequency Omnidirectional Range (DVOR) have been installed and calibrated in Kano.

Other areas of progress according to the NAMA boss include improvement in Air Traffic Control (ATC) capacity through training and retraining of critical personnel and others, addressing depleting ATC manpower, enhanced staff welfare through implementation of harmonization of salaries and the signing of new condition of service which is awaiting approval by government.

On critical projects to be embarked upon by his administration in the next one year, Akinkuotu said although the issue of Aeronautical Information Services Automation by the agency has dragged on since 2009, his administration was determined to see to its completion so that NAMA can migrate to Aeronautical Information Management (AIM) in view of all the deliverables that would accrue to the agency.

Also to be given attention by management he said, is the upgrade of TRACON system and communication radios.

Other areas to be addressed according to Akinkuotu include another set of ILS and DVOR to be installed in Maiduguri, Jos, Minna and other airports even as he promised to commence the installation of multilateration equipment recently approved by government to capture and provide guidance to low-flying aircraft at the Gulf of Guinea.