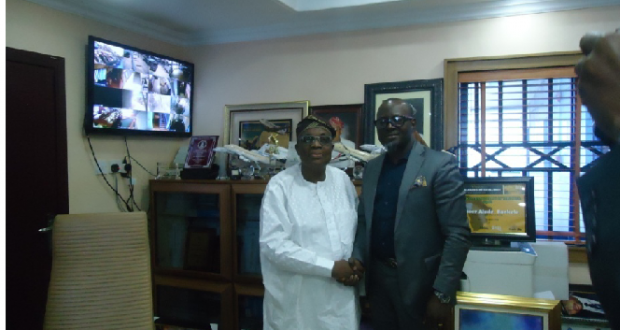 * From Left the Managing Director of Med-View Airlines, Alhaji Muneer Bankole and the National President of NANTA, Mr. Bankole Bernard during a courtesy visit to the Medview Airline boss at the organisation’s corporate office in Ikeja, Lagos.

Speaking during a courtesy visit to the Managing Director of Medview Airlines, Alhaji Muneer Bankole, at its corporate office in Ikeja, Lagos, the NANTA President disclosed that the association will in September organise an eminent persons lecture in honour of the Medview boss, whose airline now ferries passengers from London Gatwick Airport three times weekly into Nigeria with a Boeing 747 aircraft.

According to Bernard, “NANTA is proud of you not just as a local investor but your background as a travel agent before breaking forth into the airline business’’, adding that the association will help drive its commercial expectations and also “ brand” it as national carrier.”

He called on other serious Nigerians to emulated Medview progressive challenges even at this period when other airlines are struggling to survive and advised government to support the airline’s initiative.

“We are ready”, NANTA boss repeatedly assured the Medview boss and his team, who also promised to partner with association to grow the airline.

Responding Alhaji Muneer Bankole told his visitors that he will support the new NANTA leadership which has shown capacity and courage to call a spade, a spade in a strategic advocacy to change the Nigerian aviation space.

In his words, “we have been following your activities since you came on board not only as an airline but also a travel agency and we are proud to see you and your team in our office today.”

He noted on a lighter side that the two Bankoles, himself and NANTA President, will join hands to rewrite the history of aviation in Nigeria to the glory of God and Nigerians.

An online statement signed by the by NANTA Executive Secretary, Mr. Sylvester Olobor, said that the association in collaboration with Medview will set up a team to work out modalities for the partnership with a set target to facilitate regular meetings and interface with Nigerian travel trade operators.