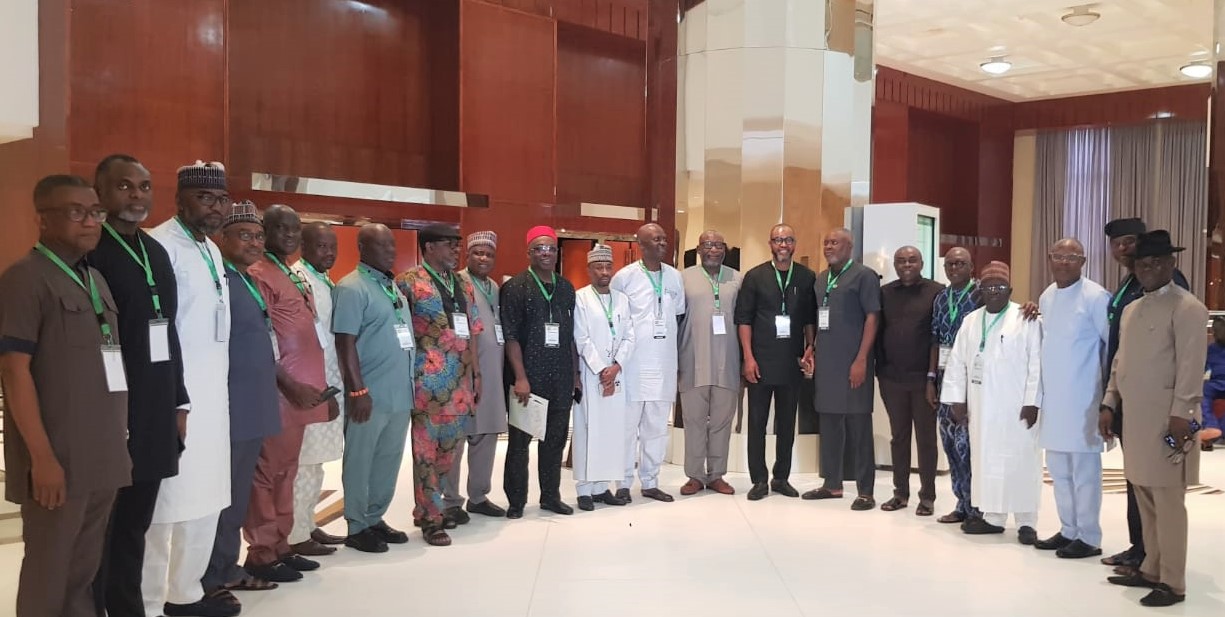 Chairman House of Representatives Committee on Banking and Currency, Hon. Victor Nwokolo (standing 12th from left), and the Group Head, Asset Management Directorate of AMCON Mr Matthew Coker (standing 9th from right) with other members of the National Assembly and senior staff of AMCON at the just concluded retreat in Lagos..

Federal House of Representatives Committee Chairman on Banking and Currency, Hon. Victor Nwokolo at the weekend in Lagos disclosed that the that the National Assembly would as a matter of urgency summon the leadership of the various key committees that are overseeing the different agencies of the federal government to investigate why the Inter-agency Committee on the recovery of the huge outstanding debt owed the Asset Management Corporation of Nigeria (AMCON) are not working as directed by the Presidency.

Recall that in September of 2019, the Vice President of Nigeria Prof. Yomi Osinbajo SAN, inaugurated an Inter-agency Committee to speedily resolve the challenges in recovering over N5 trillion AMCON debts. Osinbajo, who inaugurated the committee at the Presidential Villa, Abuja, had tasked its members to deploy their expertise in the assignment to ensure that AMCON meets its mandate within reasonable timeline.

Members of the committee include heads and representatives of agencies such as the Independent Corrupt Practices and Other Related Offences Commission (ICPC), the Economic and Financial Crimes Commission (EFCC), and the Nigerian Financial Intelligence Unit (NFIU). Others are heads of the Central Bank of Nigeria (CBN), the Nigeria Deposit Insurance Corporation (NDIC), the Federal Ministry of Justice and AMCON. They were expected to review the status of the huge debts owed to AMCON, deliberate on practical, legal and other strategies for the recovery of the outstanding debts. The committee is chaired by Prof. Bolaji Owasanoye (SAN) who is also the ICPC chairman.

Nwokolo who spoke at this year’s edition of the House of Representatives Committee on Banking, and Currency retreat with the Management of AMCON among other stakeholders at the Lagos Intercontinental Hotel in Victoria Island said it was sad that agencies of the federal government of Nigeria work at cross-purposes rather than collaborating to ensure that they support the federal government, and the economic recovery of Nigeria after coronavirus (COVID-19) pandemic had dealt a deadly blow on the economy of Nigeria and the global community. The retreat was themed, “Asset Recovery as a tool for Enhanced growth, and Stability of the Banking sectors sustaining the Impact and Bridging the challenges of AMCON.”

He said, “We cannot continue like this because we are answerable to the people of Nigeria and our constituencies as lawmakers. They will hold us accountable if we fail to take decisive actions that would help AMCON to recover these huge outstanding debts.” Nwokole insisted that it does not sound pleasant to the ear that the person of the Vice President Prof Yomi Osinbajo had set up a committee that was supposed to force sister agencies of the government to collaborate and mount pressure on AMCON obligors within the ambit of the law to ensure that these debts are resolved.

He said in a sane clime, ministries, departments and agencies of the government are supposed to work in sync to ensure that nobody shortchanges the federal government, but from reports we get from AMCON, it is obvious that they are facing frustrations from not just the obligors but from the judiciary, as well as ministries, departments and agencies of the federal government. There is no reason why that should happen in a decent country.

For that reason, Nwokolo said the national assembly would in no distant time organize another retreat which would involve about six critical stakeholders to discuss in great details the strategy that would be adopted to ensure that Nigeria recovers its money, which some heartless obligors owe the country, and for which they are hiding under all manners of trickery to evade repayment. He however commended the leadership of AMCON led by Mr Ahmed Kuru as Managing Director/Chief Executive Officer for their resolve to persistently chasing the debtors some of whom feel they are bigger than the country.

He however restated the fact that given that the AMCON Act has been amended and already signed into law by President Buhari, the national assembly will continue to strengthen the laws of the country on enforcement. He said enforcement has become critical given the tactics of the debtors, which has constrained AMCON from achieving optimum results especially since public funds were used to buy these loans that helped prevent systemic collapse of the banking sector in Nigeria at the time AMCON was created in 2010.

In his own submission, AMCON Managing Director/CEO, the Corporation has recovered about N1.4trn, which comprises of cash N681bn; Property Forfeiture N279bn; Share Forfeiture N140bn; and other strategic assets N208bn. Similarly, a total cash recovery of over N116.9bn has been recovered on Polaris EBAs from date of acquisition to date. The AMCON MD/CEO who was represented by Mr Matthew Coker who is AMCON’s Group Head, Asset Management Directorate told the lawmakers that despite the Special Powers as provided by the Act, AMCON still struggle with the implementation due to our judicial system.

He said, “Honorable members, the Corporation’s recovery processes at this point majorly depends on the Judiciary i.e., Obtaining Possessory Orders or Orders for sale. The slow pace of our court processes and sometimes conflicting orders by the Courts, especially at the Federal High Court (FHC), which is our Court of first instance frustrates recovery process. There are delays in obtaining dates in the Court to hear AMCON matters.

“Deposit of judgement sum as provided for in the act is not enforced by the Courts, some of the obligors are still active contractors of the government. They carry out businesses with government with debtor company names or other pseudo names and the BOFIA Act that provided for a Special Tribunal on recovery and enforcements would have hastened the adjudication of our matters in Court if the Judiciary had constituted a task force specifically in that regard,” he concluded.