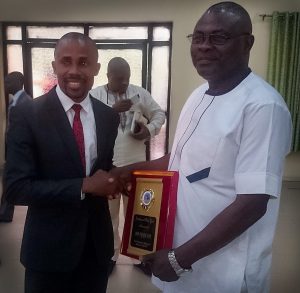 The carrier had earlier emerged the “Best Domestic Airline of the Year 2016” at the maiden edition of TELL Awards for Excellence held in June this year. It also received Interswitch’s “Payment Innovation Driver, Aviation” award in September.

Presenting the “Best Domestic Airline of the Year” award to Air Peace at the opening session of the 46th Annual General Meeting/Conference of NACTA in Uyo, Akwa Ibom State on Thursday, the group said the was honoured for transforming Nigeria’s aviation industry and giving hope to workers, investors and the flying public at a moment of economic downturn in the country.

“Air Peace,” NATCA said, “is consistently transforming to being the largest domestic airline in Nigeria within the very short period of time it came on board. While other notable airlines and businesses are closing down under the harsh economic conditions, Air Peace keeps emerging and giving hope to other investors that Nigeria is still an investment destination. While others are reducing their workforce, Air Peace keeps opening new destinations and providing more connectivity and employment to Nigerians.”

Receiving the award, Air Peace gave credit to its staff for toiling to sustain the high quality of its flight operations.

The airline, which was represented by its Corporate Communications Manager, Mr. Chris Iwarah, commended NATCA for prioritising merit and guarding the integrity of its awards.

Air Peace described the award from NATCA as special, coming from a critical segment of aviation workers with the capacity to easily appraise the strengths and weaknesses of airlines in the country.

The carrier, which recently acquired two B777, six ERJ145 and a couple of B737 aircraft to bring its fleet size to about 24, assured that its expansion to the West Coast of Africa and international destinations, including Dubai, London, Guangzhou-China, Atlanta, Mumbai and Johannesburg, would ensure Nigeria did not continue to lose out in the open skies regime in the global aviation industry.