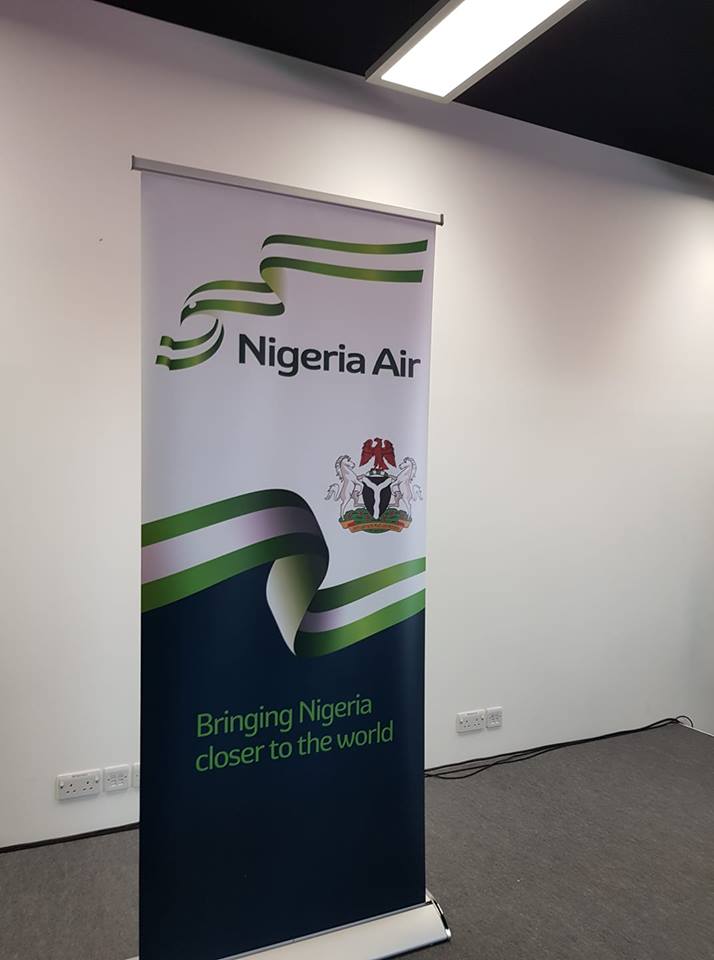 The Federal Government of Nigeria, through the Minister of State for Aviation, Senator Hadi Sirika, today revealed the branding and livery for a new national Flag Carrier Nigeria Air due to be launched at the end of this year. Senator Sirika spoke at a press conference at the Farnborough Air Show at 1pm today.

Senator Sirika, the Honourable Minister of State for Aviation, said “I am very pleased to tell you that we are finally on track to launching a new national flag carrier for our country: Nigeria Air.  We are all fully committed to fulfilling the campaign promise made by our President, Muhammadu Buhari in 2015.  We are aiming to launch Nigeria Air by the end of this year”.

He continued: “I want to personally thank our Transaction Advisers, led by AMG, and the special Task Force, who have worked diligently to achieve the results so far and overcome the challenges involved. We obtained the Certificate of Compliance from the Nigerian Infrastructure Concession Regulatory Commission (ICRC) two weeks ago and can now go into the investor search. I am confident that we will have a well-run national flag carrier, a global player, compliant to international safety standards, one which has the customer at its heart. We hope to establish an airline that communicates the essence of our beautiful country, an airline we can all be proud of.”

The minister continued: “‘Following extensive market research, the branding of our new airline, Nigeria Air, demonstrates a true flag carrier of our nation, soaring through the skies in the shape of our nation’s eagle.”

The branding and naming of the new national carrier comes on the back of a social media campaign undertaken under the auspices of The Ministry of Transportation (Aviation) which invited Nigerian youth and students for their input and creativity to come up with a name for the new Nigerian flag carrier. The Facebook page and website www.nameyourairlinenigeria.com engaged over 400,000 people up until the deadline for submissions, which was on 25th June 2018.

In addition, detailed and extensive market research was commissioned by the Ministry of Transportation (Aviation), which involved focus groups across Nigeria and over 100 interviews with aviation stakeholders and professionals, politicians, Nigerian business owners, students and a broad spectrum of people across Nigeria.

The research concluded that Nigeria is a proud nation with diverse populace, a strong cultural heritage and a people that are hungry for a unifying national flag carrier.

The Nigerian Government will support the launch of the new flag carrier with viability gap funding, in a Public Private Partnership (PPP) arrangement to deliver a national flag carrier, guided by the international ICAO standards, that will stand the IOSA audit from the start, and lead to a fast IATA membership for international operation.

He assured Nigerians and the international community that government had learnt a lot of lessons from the experience of the defunct Nigeria Airways, and now determined not to repeat the mistakes that led to its demise. This, he said, informed the decision to take the Public Private Partnership (PPP) approach.

He explained that the unveiling of the airline at the Farnborough International Airshow was cognizant of the fact that being the largest congregation of global aviation industry players, the event affords the best opportunity to market the airline to prospective investors and register it in the minds of all stakeholders ahead of its formal launch billed to take place in Abuja before the end of the year.