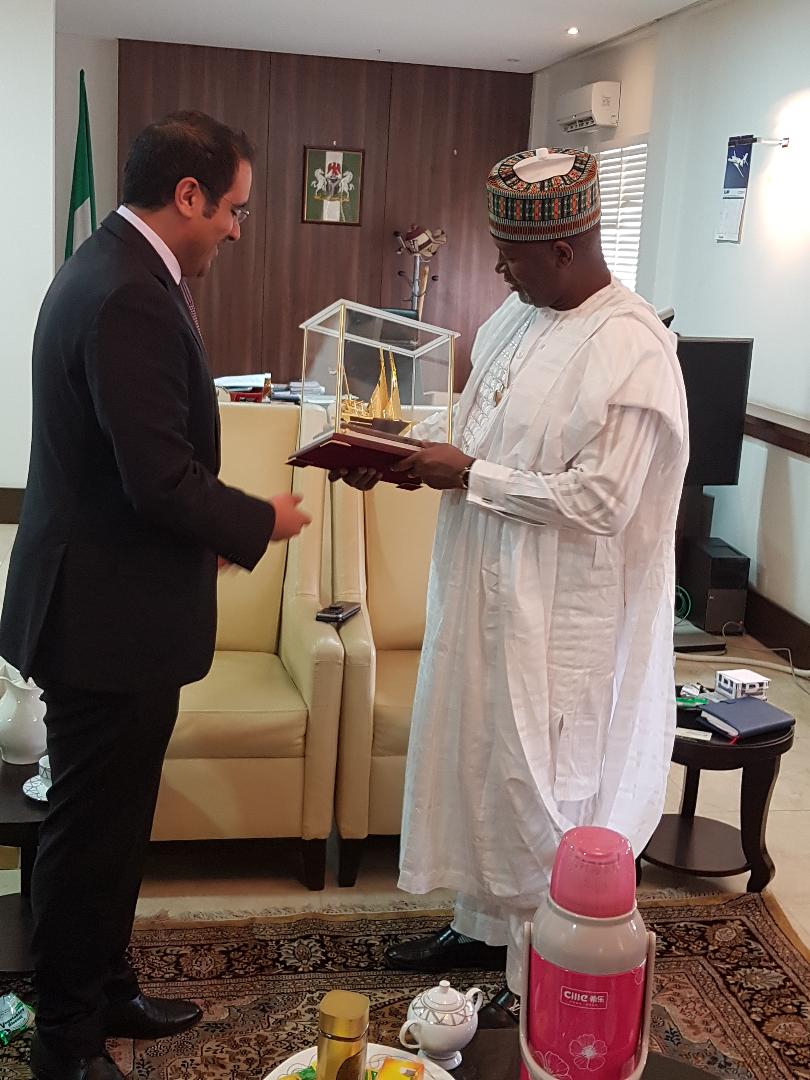 Minister of State for Aviation Senator Hadi Sirika and the United Arab Emirates Ambassador to Nigeria, Fahad Al Taffaq during the envoy’s visit to the Minister

Minister of State Aviation, Senator Hadi Sirika has reaffirmed that the suspended national carrier would be activated as soon as possible, although the December 4th earlier given for its take-off is no longer feasible.

The Minister who made the declaration while receiving the United Arab Emirates (UAE) Ambassador to Nigeria, Fahad Al Taffaq in his office, said the suspension was only in the interim and that a new pronouncement would soon be made on the project.

According to the Minister, it is inconceivable that Nigeria, with its population of over 180 million people, would not be a major player in the aviation industry, noting that even the country’s geographical location has made it a natural hub for air transportation and ancillary businesses.

Nigeria and United Arab Emirates, Sirika said, have had a long standing relationship politically and businesswise, especially in the aviation sector, and hoped that the new envoy will use his presence in the country to further boost these relationships.

He also harped on the need for Emirates Airlines to increase its daily flights out of the Nnamdi Azikiwe International Airport, Abuja to compliment the support and patronage that Nigerians have given it and asserted that government was doing all that was necessary to provide the conducive environment that airlines need to thrive.

Ambassador Fahad Al Taffaq had earlier told the Minister that he was at the Ministry to reaffirm his country’s continued cooperation with Nigeria in the area of Aviation where both countries have enjoyed a long-standing relationship.

According to him, it was in view of such a relationship that the United Arab Emirates has approved the extension of it’s tourist visa to six months while on a visit to the country, meaning that Nigerian tourists can stay for up to six months.

He also informed the Aviation Minister that plans have been completed for the opening of a visa office in Lagos in order to mitigate the hardship of coming to Abuja for visa processing.

The Ambassador promised to maintain the strong political and economic affinity between Nigeria and his country, a situation that is underscored by the number of Nigerians living and working in the United Arab Emirates which he put at over 20 thousand.