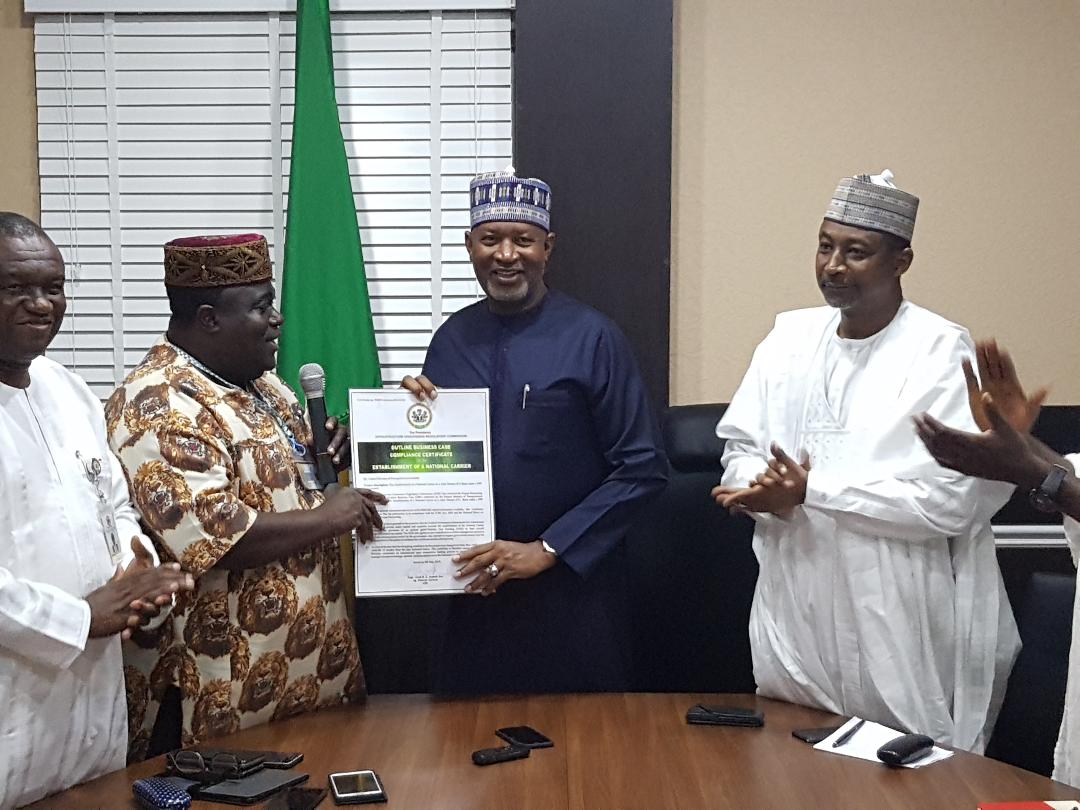 Minster of State for Aviation Senator Hadi Sirika flanked by the Director General of the Infrastructure Concession Regulatory Commission, Engr Chidi Izuwah and the Permanent Secretary, Transportation, Sabiu Zakari during the presentation of the Certificate of Compliance for the National Carrier to the Minister.

The Minister of State for Aviation Senator Hadi Sirika has reiterated his pledge that the  proposed national airline for Nigeria will be unveiled before the end of the year,

The Mimister  who gave the assurance while receiving the Outline Business Case Certificate of Compliance from the Director General of the Infrastructure Concession Regulatory Commission (ICRC), Engr Chidi Izuwah, said the presentation of the Certificate of Compliance was an official approval of the process through which the project has gone so far.

According to the Minister, there’s no doubt that the issue of national carrier for Nigeria is very close to the hearts of both the government and the people, which is the reason it has taken the option of a Public Private partnership with the belief that it was the only way to deliver a national carrier that would stand the test of time.

He commended the efforts of the ICRC Director General and his team in ensuring that the National Carrier project has remained on track through the observation of all legal aid regulatory frameworks.

Senator Sirika also expressed satisfaction with the way the Transaction Advisers have carried out their assignments with utmost diligence and timeliness, assuring that the National Carrier that would be delivered would be world class in operation and management.

He used the occasion to debunk claims that the National Carrier would sound the death knell for other airlines operating in the country. Nigeria, with a population of over 180million people with so many unserviced routes offered more than enough space for all serious airlines to operate profitably, the Minister asserted.

Speaking earlier, the Director General of the Infrastructure Concession Regulatory Commission, Engr Chidi Izuwah said the presentation of the Certificate of Compliance was an official green light to proceed with the procurement process.

He said that his Commission, in granting the Certificate reviewed the Project Structuring Report, also known as the Outline Business Case, in line with the ICRC Act of 2005.

According Izuwah,  the Certificate was granted on the condition that the Federal government has committed to leveraging on private sector capital and expertise towards the establishment of the national carrier through the provision of a Viability Gap Funding for the project.

He stated other conditions for granting the Certificate of Compliance to an official commitment to zero contribution to airline management decisions and zero government, control, warning that any attempt to impose government control would invalidate the Certificate and the entire process.

The ICRC  Director General comended Senator Hadi Sirika for his commitment to  changing the face of Aviation in Nigeria through infrastructural renaissance and said the PPP remains the only viable option for Nigeria in view of dwindling national resources.