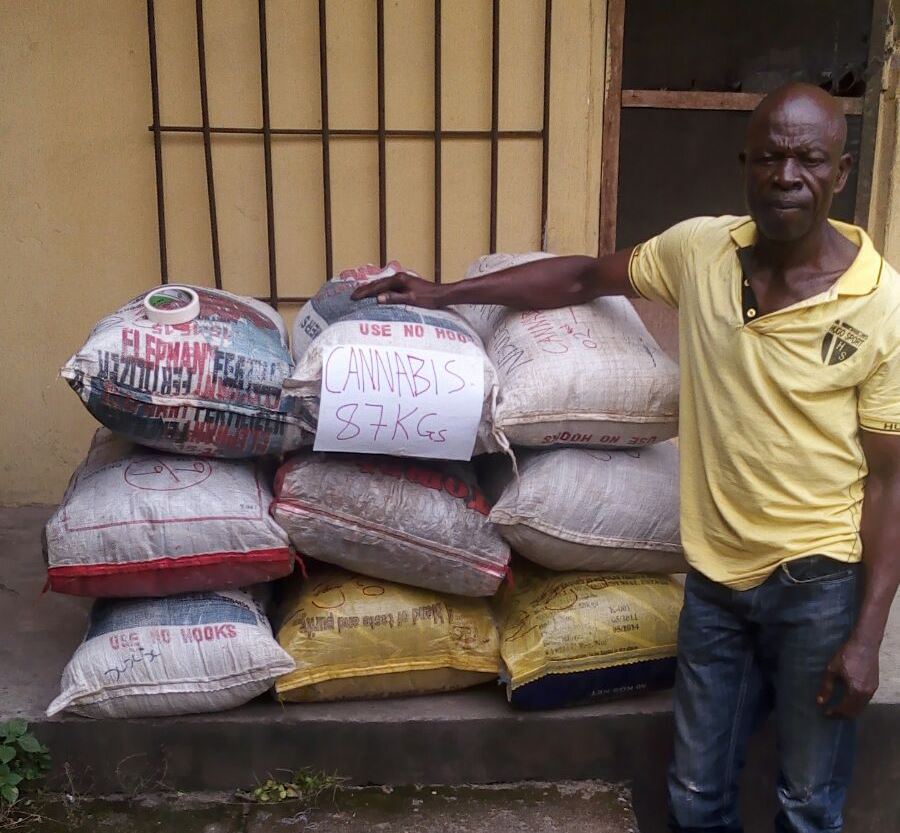 Officials of the National Drug Law Enforcement Agency (NDLEA) in Abia State,  have carried out raid operation in Aba town leading to the arrest of two major cannabis dealers.

A house used for illegal storage of cannabis was discovered and an air-conditioned Toyota car used for the distribution of cannabis in the State was equally impounded from one of the suspected drug dealers.

According to the NDLEA State commander, Dele Akingbade, the command has recorded the arrest of two major cannabis dealers in the State.

“A 35 year old man Fidelis Ogbonna who supplies cannabis in an air-conditioned Toyota Avalon Saloon car with registration number AWK259SZ in the State has been apprehended. We also recovered 50kgs of cannabis inside the car which were meant for supplies to customers while another suspect, Ndudim Nwoke, 68 years was arrested with 87kgs of cannabis in his warehouse.

The command is intensifying efforts to eradicate illicit drugs capable of promoting criminality in the State”.

According to Fidelis,  “I could not further my education beyond primary school because my father died when I was a little child. A friend introduced me to cannabis sales. I use the proceeds to take care of my family. I also use my personal car to distribute the drugs to avoid suspicion. I put on the air conditioner and use air freshener to suppress the smell of cannabis”.

Ndudim told investigators that he had been sustaining his family with the proceeds of cannabis sales.

“I have no formal education because of my humble background and I am married with two children. Cannabis sale is my only source of livelihood”, he stated.

The Agency had also declared the son of Ndudim who is on the run wanted. The son, Ndudim Agbo is alleged to be neck deep in cannabis distribution in Aba alongside with his father. Efforts are ongoing to arrest Agbo and other persons linked with the cannabis trade in the State. Acting Chairman/Chief Executive of the Agency, Mrs Roli Bode-George expressed optimism that anti-drug strategies of the Agency will continue to yield positive results across the country.

“The NDLEA will continue to perfect its drug eradication strategies across the States. These arrests and seizures are products of painstaking surveillance and the public should look forward to a systematic dismantling of drug trafficking cartels in the days ahead”, she stated

The suspects will soon be charged to court for unlawful possession and trafficking of cannabis contrary to section 11 subsection c and d of the NDLEA Act.