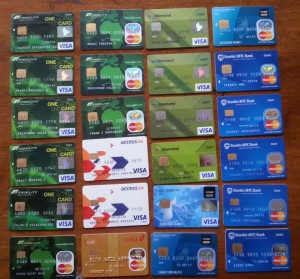 Ahmadu Giade, chairman of the Agency, said that the suspects conspire with others to evade scrutiny from government agencies by opening various bank accounts with the aim of using the debit cards for daily withdrawals abroad.

According to Giade, “this is a process of money laundering where multiple debit cards are used to withdraw money to circumvent the minimum amount of daily withdrawal. That criminal plan will not work because we shall continue to seize such cards and arrest the perpetrators at all entry and exit points”.

He warned those smuggling Automated Teller Machine (ATM) cards to desist from such act or be prepared to face the long arm of the law.

Ahmadu Garba , NDLEA commander at the Lagos airport, gave the names of the suspects as Nweke Pauline Osita, 40 and Egesiokwu Frank Chukwudi, 41.

“We arrested Nweke Pauline Osita with 65 debit cards and Egesiokwu Frank Chukwudi with twenty-four 24 debit cards during screening of passengers on an Ethiopian airline flight to China” Garba stated.

On her part, the director of Assets and Financial Investigation of the Agency, Victoria Egbase, said that the statements of the suspects had been taken under caution and that preliminary investigation points to the fact that the various bank accounts were opened to facilitate withdrawal of money outside the country.

Nweke Pauline Osita, an Onitsha based trader who was caught with 65 debit cards said that the cards belong to friends and business partners.

“I am a trader. I sell men clothes at Onitsha. I was on my way to China to buy goods when NDLEA officers arrested me with 65 debit cards. The cards belong to my friends, relatives and business partners” Nweke stated. He hails from Enugu State and married with two children.

The second suspect, Egesiokwu Frank Chukwudi who has a boutique at Aba, Abia State was found in possession of 24 debit cards.

The NDLEA Chairman has directed that the suspects be transferred to the Economic and Financial Crime Commission (EFCC) for further Investigation.

Meanwhile, officials of the NDLEA recently arrested a trader, Udeh Onuora Pascal who was travelling to China with 108 debit cards.

The arrests is an indication that smuggling of debit cards abroad is one of the latest money laundering techniques employed to evade financial regulations.