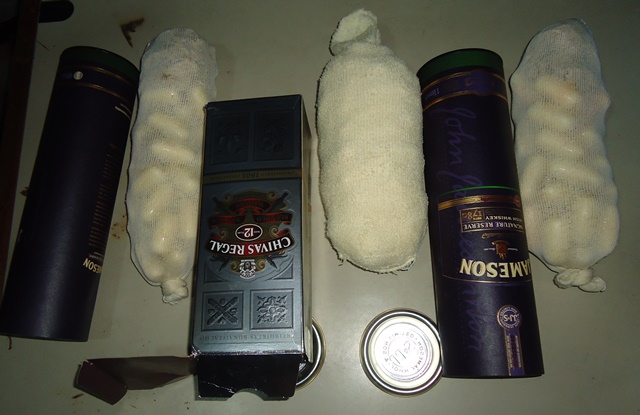 Wraps of cocaine in Whiskey packs

Officials of the National Drug Law Enforcement Agency (NDLEA) at the Murtala Muhammed International Airport (MMIA), Lagos, on Thursday, arrested two persons with cocaine weighing 6.64kg and with an estimated street value of N59 million. Chairman/Chief Executive of the NDLEA, Ahmadu Giade said that the Agency had intensified surveillance and search operations at all exit and entry points.

According to Giade, “In preparation for the end of year the Agency has intensified surveillance and search operations. This is geared towards ensuring that no consignment of drug goes undetected. Adequate preparation has been made to prevent drug trafficking and ultimately enhance security of life and property. NDLEA commander at the Lagos airport, Ahmadu Garba gave the names of the suspects as Okwuma Sunday Michael; 31, who was found in possession of 3.400kg of cocaine hidden inside wooden frames and Nwajagu Chidiebere James, 30, found with 3.240kg of cocaine hidden inside packs of Irish whiskey. “Okwuma Sunday took off from Guarulhos International Airport São Paulo, Brazil in a South African Airways flight through Johannesburg to Lagos.

“Nwajagu Chidiebere also left Brazil in an Emirates flight through United Arab Emirates (UAE) to Lagos. Both suspects will soon be charged to court” Garba stated. Okwuma told investigators that he was given the drugs by a Nigerian who is like a father to him in Brazil.

“I live in São Paulo with my wife and child. I work in a supermarket but my salary is not sufficient to take care of my family. The man that gave me the drug is like a father to me. He used to assist me financially whenever I needed help. When I told him I was home sick because for two years I have not visited Nigeria and he promised to help me. He was the one that bought my ticket and gave me $3,000. I was very happy for the gesture.

“He also gave me a bag containing children clothes and wooden frames to take to Nigeria. When I got to Lagos, NDLEA officers opened the bag and found cocaine” he stated. Nwajagu said that he was told to bring a bag to Nigeria and be settled financially.

“I was in my village in Anambra doing menial jobs to sustain myself. I came to Lagos on a short visit when I met an old friend. He was very nice to me because he used to give me money, buy me drinks and food. He told me to bring a bag from Brazil and that he will settle me financially to start my own business.

“That was how I travelled out of Nigeria. On arrival, the bag was searched and cocaine was found inside packs of Irish whiskey. I never knew I will end up this way”, he lamented.