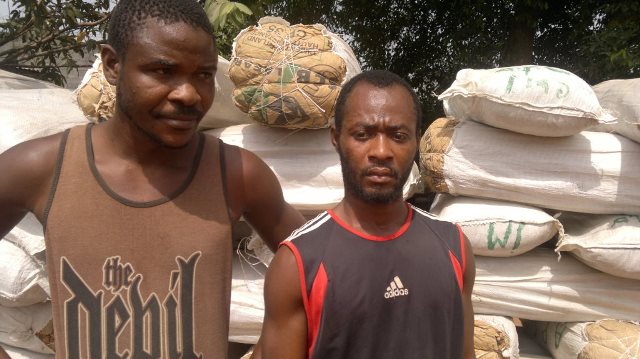 Operatives of the National Drug Law Enforcement Agency (NDLEA) have intercepted a truck load of cannabis disguised as biscuits and cheese balls.

The discovery of the drug weighing 3,542.25kg was made by officers and men of the Agency in Ogun State along Odeda axis of Ijebu-Igbo in Ijebu North Local Government of the state.

Two suspected cannabis dealers conveying the drugs, Ihenacho Chinweuba, 27, and Uche Enuosa, 33, have been arrested and the truck impounded.

NDLEA commander in Ogun State, Bala Fagge said that the shipment was meant for consumption in Ogun and Lagos States.

Ihenacho Chinweuba, 27 years old, who hails from Nsiala-Ngwa Local Government, Abia State and one Uche Enuosa, 33 years old from Asaba, Delta State said that they were to distribute the drugs in Ogun and Lagos States when they were arrested by anti-narcotics officers.

The cannabis was neatly arranged in the inner part of the long containerized truck while the outer part was filled with more than three hundred (300) cartons of Biscuits and Cheese Balls to cleverly evade arrest by Security Agents.

The suspects in their statements blamed their involvement in drug trafficking to joblessness and desire to earn money for the end of year celebration.

According to Uche, “I am a plumber but due to lack of work I decided to drive the truck. I have no savings and the only way I can travel home this festive season was to engage in cannabis business”.

Similarly, Ihenacho said that he was desperate because he is married and had to provide for his family. “I am married with children. I have not bought anything for my family this end of year season. It was joblessness that made me to deal in hemp.

All my hope was on this cannabis shipment because I know that if we were successful, I would have made my family happy this season. The cartons of biscuits were to hide the drugs but it is unfortunate that we were arrested and my entire dream has shattered” he stated. The acting Chairman/Chief Executive of the NDLEA Mrs. Roli Bode-George assured members of the public that the Agency has taken measures towards a drug-free celebration this festive season by cutting off illicit drug supply in the country.

“Targeting criminal wealth and cutting off drug supply are some of the cardinal drug control strategies to ensure a safe and healthy celebration this season. Efforts shall be intensified towards preventing the supply of drugs to end users. This spectacular seizure of 3,542.25kg will definitely go a long way in eradicating drugs from our society. The Agency is processing similar high level intelligence that will lead to more seizures in the days ahead” Roli stated.

She added that the truck conveying the drugs will also be forfeited to the Federal Government in accordance with the NDLEA Act.

Research has shown that long term cannabis use can increase abnormally structured cells in the body, reduce male sex hormones, rapid destruction of lung fibers and lesions (injuries) to the brain, reduced sexual capacity and reduced ability to learn and retain information among others.

The suspects will soon be charged to court and if convicted could get life imprisonment.